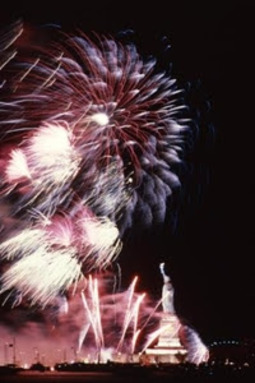 Traveling during the Fourth of July weekend sounds like a fun idea, but that is a common one for many Americans. According to a new report from auto club AAA, 41 million people will be traveling to celebrate the nation's birthday. This is a 1.9 percent increase from the number of people who packed their bags in 2013.

Marshall Doney, AAA's chief operating officer, said summer is a perfect time to travel, but this weekend in particular is a busy one.

"With school out for summer, the Fourth of July holiday is typically the busiest summer travel holiday, with 5 million more Americans traveling compared to Memorial Day (2014) weekend," Doney said.

Traveling to an exotic locale by plane during the Fourth of July weekend - which AAA designates as July 2 to July 6 - is a popular choice, as air travel is expected to increase 1 percent from the previous year. These travelers will be paying less, as airfare is 5 percent lower than it was in 2013.

But packing up a car with friends and family still seems to be the most popular mode of transportation for Americans. Enterprise Holding, which owns rental car companies Enterprise Rent-A-Car and Alamo Rent A Car, reported an 11 percent increase in rental car reservations from 2013.

Travel does seem to be picking up, as gas prices have not decreased as usual during this time of year. The report from AAA showed that the average price for a gallon of gas is about 20 cents more in 2014 than it was in 2013. AAA attributes the higher prices to higher crude oil costs.

If you're one of the 41 million people who will be packing up during the holiday weekend, you may want to save a little money, especially if you have to pay for expensive gas. Here are a few ways to cut down on your road trip costs:

Prep your car
Chances are, you're going to spend the better portion of your day in your car. You can cut down the time of your trip - not to mention, how many times you stop for gas - if your car is in prime condition. You don't have to get a full tune up, but make sure your tires have enough air, headlights and brakes are working and auto insurance is up to date.

Plot your route
Planning every pit stop can help you determine how many miles you're going to drive each day. Check out Google Maps for the best routes and see if there is any construction on your route as well as alternative paths.