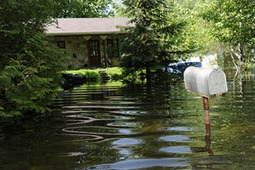 After the devastating effects from superstorms that have cascaded throughout the U.S. over the past few years, flood insurance rates were set to rise exponentially in areas typically hard-hit by wet weather. Thanks to the actions of the U.S. Senate however, it is likely that those rising rates will remain affordable for Americans. Senators voted to pass the bipartisan bill that would relieve homeowners of anticipated premium spikes over the next few years.

In 2012, the federal government-sponsored flood insurance program was meant to create affordable flood insurance for homeowners in areas prone to flooding. However, the change was meant to bring insurance policyholders off of subsidized rates, but resulted in premiums rising thousands of dollars for homeowners. Many homeowners in coastal states were threatened financially by these steep increases in premiums, which could have resulted in many moving or being unable to afford their insurance. Without the bill scaling back the costs of flood insurance, some homeowners were facing premium rates reaching more than their mortgage payments.

New laws
After passing the Senate, the flood insurance bill, known as the Homeowner Flood Insurance Affordability Act, has been sent to President Barack Obama to be signed into law. The bill outlines that flood insurance premiums will have a cap for annual rises in premiums. No insurance rate will be able to rise more than 18 percent year over year for properties insured with the National Flood Insurance Program.

While most Americans have homeowners insurance, not everyone invests in flood insurance - which has its own, separate premium. In states such as Florida and Louisiana, homeowners who reside along the Gulf Coast are often required to have proof of flood insurance when they purchase a home, as these areas are prone to flooding and have been hit with intense storms in the past.