Electric Vehicle Prices Down, Sales Up 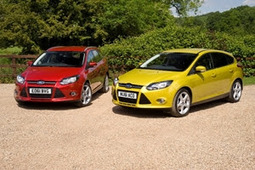 In January of last year, Clean Technica reported consumers would see the cost of electric cars fall in the next year or two, and now the Ford Focus Electric is the latest vehicle to get a price drop and prove that theory.

Prior to the price cuts, electric and hybrid vehicles were often seen as too expensive for the average consumer, and people weren't sure how their auto insurance prices would be affected.

But, substantial drops in retail prices for electric cars may be changing that perception and allowing environmentally friendly vehicles to take over a bigger share of the auto market. According to Green Car Reports, 96,000 electric vehicles were sold in 2013. That total is more than five times what was sold in 2011, which was the first year electric cars hit the market.

Previous price drops
The Nissan Leaf was the first car to become more financially accessible in 2013 with an 18 percent drop in price to $28,800 for the entry-level S grade option, Clean Technica reported. At the time, this made the 2013 Leaf the lowest-priced electric vehicle sold in America.

Following Nissan's announcement, GM reduced the price of its Chevy Volt last year by $5,000, Time magazine reported. The 2014 Volt, which became available in August 2013, started out with a retail price of $34,995.

Ford spokesperson Aaron Miller confirmed the newest starting price with AutoblogGreen and stated, "We hope by reducing the price we're giving consumers another reason to consider it."

Will the Focus catch up in sales?
Now the question is whether the Focus EV will be able to compete with the Leaf, which is in the same price range. The Volt was the clear sales winner last year with 23,094 purchases in 2013, according to Green Car Reports. The Leaf sold 22,610 units last year to come in runner up. As of the end of September, Ford sold a total 1,534 Focus EVs in the U.S. while the Nissan Leaf sells around 3,000 units each month in the U.S.