Driving Without Insurance In Louisiana Just Got Even Riskier 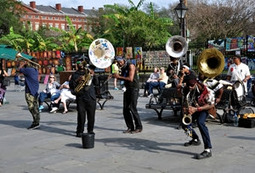 Driving without auto insurance is always a dangerous decision, but doing so in Louisiana is a risk that could complicate your very livelihood.

Bayou State legislators recently passed a $33-million increase to be applied to fines charged whenever drivers are caught operating a vehicle without properly maintained car insurance. According to an Associated Press report, the massive rate hikes were devised to improve salaries for the state's sheriffs, police troopers and district attorneys, with a minimum $75 charge for a first-time offender caught driving without insurance serving as the baseline penalty.

Louisiana already has a reputation for being one of the costliest places to insure your driving privileges, but the six lawmakers who crafted the bill's final version contend that the number of undeterred uninsured still cruising around their state made the changes necessary. Opponents of the law argue that the brunt of the fees will be imposed on lower-income residents who can't afford the already steep insurance rates, yet legislators have stood their ground, maintaining that the only way to discourage people from driving without insurance is to hit them in their wallets.

Gov. Bobby Jindal is expected the sign the bill, which was adjusted on the final day of the most recent state legislative session, rendering it effective as law by July 1.

"This is a $53 million tax that will fall mainly on the poor, and it was conceived in the worst possible way, behind closed doors without public debate in the last few hours of a legislative session," Jan Moller, director of the Louisiana Budget Project, an advocacy group for low- and moderate-income households, told the AP.

Funds for fair pay
The head of the Louisiana State Police, Col. Mike Edmondson, noted that adjustments to the pay scale for troopers, among other state employees, are long overdue. Approximately $42 million of the earmarked $53 million will go toward increasing troopers' salaries, which currently begin at a little more than $35,000 per year.

Edmondson said that the goal is simply to improve compensation levels so that they are "on an even field with everyone else," with the changes designed to bump starting salaries near $46,000 by the 2015-16 budget year.

The losers in this case, of course, are Louisiana residents who either can't afford or are daring to drive without auto insurance. Fortunately, there are resources available to help drivers of all budgets find affordable insurance options - prices that pale in comparison to the penalties that must be paid by those caught breaking the law.