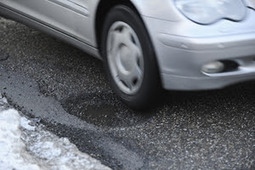 Over the past few months, many regions in the U.S. have been plunged into a polar vortex, creating one of the harshest winters of the past two decades. While millions complain about frozen toes and red faces, another problem lies in the middle of the road - potholes.

This winter has been particularly irksome for drivers and expensive for many cities. For example, in Frederickson, Va., the Virginia Department of Transportation has already filled 3,427 potholes since Jan. 1, according to Frederickson.com. The state is likely to surpass the snow removal budget of $157 million by $60 million to 70 million this year.

Pothole damage coverage
When you have comprehensive coverage on your auto insurance policy, you are probably already protected from pothole damage. However, filing a claim could end up costing you in several ways. For one, you will likely have to pay your deductible for the costs of repairs. Additionally, whenever you file a claim, it is possible that your rates could rise over time.

Before you head out on the road, be sure to check with your car insurance company that you are covered for pothole damage. If you are not, there may still be a way to be reimbursed for damages caused by potholes. Certain states allow drivers to charge repairs to the state.

"Many drivers are unaware of the fact the state or local government will reimburse them if they file a claim for pothole damage to their vehicles," John Townsend, of AAA, told Frederickson.com. "So provide proof with a repair receipt and submit photos of the pothole and the damage to your car."

If you find yourself needing to get your car repaired from a pothole this winter season, check with your state and local laws for additional coverage options.