Chevrolet Volt Is One Of The Safest Cars On The Road 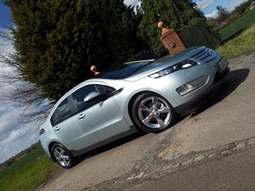 A safe vehicle can save a person's life and cut down on the amount drivers pay for their auto insurance premiums. But with so many cars on the market, consumers may not know which automobile is best for them. Luckily, the search is over, as the Insurance Institute for Highway Safety made its pick for the safest car on the road: the Chevrolet Volt.

The IIHS names a "Top Safety Pick Plus" car every year, and the Chevy Volt came out on top over 12 other vehicles. When assessing cars, the IIHS rates them on a scale from good to poor using five categories, including:

With the exception of small overlap front, which was rated "acceptable," the Volt got "good" ratings for all categories.

The IIHS subjected the 12 cars to several rigorous tests at different speeds. The goal is to stimulate a head-on collision and other types of accidents that can occur by hitting a tree, telephone pole or another car.

Along with the Chevy Volt, the Mini Cooper Countryman was another stand-out vehicle. This particular model ranked the best based on crash performance. Joe Nolan, the institutes's senior vice president for vehicle research, said the Countryman's frame stood sturdy as it was put through the rigors of these tests.

"The safety belts and airbags worked together to control the test dummy's movement, and injury measures indicate a low risk of any significant injuries in a real-world crash this severe," Nolan said.

Other vehicles that were awarded the Top Safety Pick honor include the Ford C-Max Hybrid, Scion FR-S and Mitsubishi Lancer.