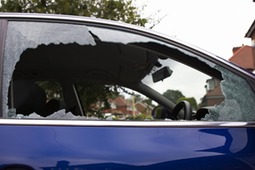 As we approach the holiday season, there are numerous reasons to be cheerful. From delicious and indulgent foods to caroling in the chilly night, the holidays are a joyous time spent with friends and family. When it come to your vehicle, there may be one more reason to cheer - Halloween is over.

After everyone has gotten their treats and done tricks, car owners can rejoice in the fact that what is often the peak of vehicle vandalism has passed. So, pass out the eggnog and park on the street if you must.

Halloween trickery
According to the Highway Loss Data Institute, car vandalism on Halloween is a full-on nightmare for insurance companies. In fact, you are more than two times as likely to be a victim of vandalization on Halloween than any other night of the year. The most-reported crimes include slashed tires and broken windows.

The report revealed that the average number of claims on any given day between 2008 and 2012 was 692. The cost of each claim was about $1,528, which added up to more than $1 million per day. The report tracked two-thirds of private insurance companies.

By comparison, the average number of claims from Halloween was 1,253. Other holidays reported a high number of vandalism claims, though none were on par with Halloween. On the Fourth of July, there was an average of 987 claims. Overall, the month of July had the most amount of claims, followed closely by August and June. For New Year's Eve, the average was slightly lower with 944 claims. While there is no one reason found in the report why vandals decide to act insidiously on these days, The Washington Post suggested it is simply because vandals have the day off on these holidays.

Fortunately, vandalism on Thanksgiving and Christmas has been historically below normal. Perhaps vandals are simply filled with too much food to cause any damage! When it comes to your car insurance rate, your monthly payment can increase if you file a claim. So, it is important to be watchful on Halloween, but you can relax during the holiday season.