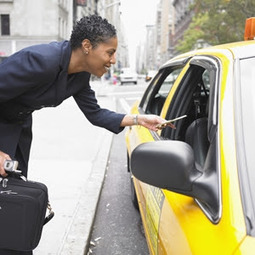 California ride-sharing services will now be required to have a minimum amount of insurance, according to the Los Angeles Times.

The legislation was signed Sept. 17, but won't go into effect until July 2015. The California assembly passed the bill after a compromise - one that ride-sharing companies could agree with. The original bill called for $1 million of insurance for a ride-sharing car, regardless of whether there were passengers or not, according to the San Francisco Bay News.

However, the final proposal was changed to $500,000, and then once again to $200,000, before it could finally get enough votes. Other new regulations include required insurance coverage of $50,000 per passenger and another $100,000 for damage. The regulations provide a minimum insurance framework for services like Uber and Lyft, which have operated independently of the majority of commercial vehicle laws for the past few years - much to the ire of competing traditional services like taxis and limousines.

An additional policy of $200,000 will now be required for serious accidents, including $30,000 for property damage, according to the LA Times.

How the law affects transportation
While opponents of the original bill spoke of the unfair regulations and expensive policies, the final result was less harsh toward ride-sharing programs. In fact, companies had already started implementing some of the legislation that addressed switching coverage from personal insurance to commercial.

Once the new policies are in place, Uber and Lyft trips will likely be more expensive to make up for lost profit going toward mandated insurance. As a result, California commuters may make the move back to traditional cabs now that industry standards will be somewhat even.

In 15 months, San Francisco cab fares dropped 65 percent because of increased competition from Uber, Lyft and FlyWheel, according to NBC News.

The new law will place the California Public Utilities Commission in charge of regulating ride-sharing insurance. Though the effects of the new changes won't be felt for nearly another year, ride-sharing services will likely start insuring their cars ahead of time to make the transition easier. In the meantime, cabs in California still have an uphill battle to win back customers - mainly because their service will still be more expensive because their auto insurance policies are higher and drivers have to licensed by the state.

Further efforts to enforce and improve ride-sharing insurance are already underway by the state Public Utilities Commission, according to the LA Times.