Bought A New Car In September? Look For New Insurance 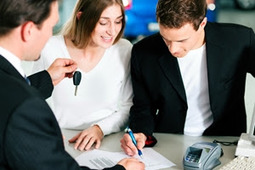 The automakers' numbers are rolling in and vehicle sales for September were up compared to August, according to The Associated Press. Many in the auto industry expected September sales to flatten a bit from August, which was the best month the industry had had in eight years. Instead they received a pleasant surprise because plenty of people splurged on a new vehicle.

Chrysler beat the other companies to the punch and released its sales numbers first, Business Insider reported. The company expected 16 percent growth but actually saw a 19 percent increase. Nissan was next and it also beat its own expectation of 17 percent with an 18.5 percent rise in sales. General Motors shared in the good news with a growth of 19.4 percent, almost 2 percent over its anticipated sales.

Honda and Toyota saw sales rise but didn't beat their expectations. The auto makers had 12 percent and 1.7 percent increases, respectively. Toyota fell far short of the 7.5 percent growth it had hoped for, but Honda only missed by 3 percent.

The vehicle maker with less than spectacular news was Ford, which announced sales fell 2.7 percent.

Reason behind the rise
In August, clearance, Labor Day sales and midsize car promotions helped give the auto industry a great month. In September, pickup trucks were what gave sales a boost. Ford may have experienced fewer sales because it temporarily shut down a factory to retool it for a new truck, according to the AP. It also reduced the number of discounts to keep more trucks in stock, which led to GM outpacing Ford in truck sales.

New cars, new insurance needs
When people purchase a new car or truck, they're in a great position to shop around for a new auto insurance policy. People often roll their insurance policies over from year to year, but this can mean they end up paying much more than they need to because the insurer keeps raising prices. A new vehicle may need different coverage than the old policy has, so buyers should use CoverHound to review auto insurance prices in their area.