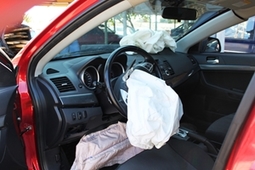 The situation surrounding malfunctioning airbags sold by Japanese airbag manufacturer Takata has become more disheartening over time, but the company's industry partners continue to use the safety equipment in new models. Evidence of Takata's wrongdoing surfaced several months ago, and airbags manufactured by the company have been linked to five deaths worldwide. This has led to the recall of 14 million vehicles according to The New York Times, and it is likely that more recalls will follow.

A disturbing element of the affair involves slow or nonexistent reporting of airbag-associated deaths. Honda, one of Takata's largest customers, knew about multiple deaths and many more injuries that have since been linked to the airbags installed in its vehicles. The automaker did not report these events to U.S. regulators, and this represents a violation of the Transportation Recall Enhancement, Accountability and Documentation Act, legislation passed in 2000 to ensure the prompt reporting of automotive fatalities and malfunctions, according to the Associated Press. After months of denials, Honda admitted that its actions were in violation of the law, but even now, there is a sense that automakers are obfuscating the true depth of the problem.

The Times reported that the National Highway Traffic Safety Administration called for carmakers to broaden the scope of airbag recalls. Currently, auto manufacturers have recalled vehicles in hot and humid parts of the U.S. Despite the NHTSA's request that the recall expand to cover the entire country, Takata and automakers are firm in their belief that the airbags cause problems only when exposed to heat.

Continued use
Despite the widespread acknowledgement of Takata's faulty airbags and the knowledge that Takata and carmakers who used their airbags knew of the products' safety issues, many companies in the auto industry continue to use Takata's airbags and other products, Bloomberg reported. American manufacturers such as Ford and GM are installing Takata components in vehicles for sale this year, and Japanese automaker Toyota has come forward to defend Takata's recall efforts. All of this invites a question about whether insurance premiums will be different for the cars that feature these components.