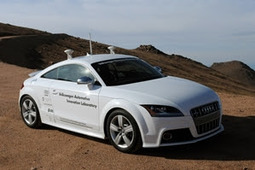 Audi is making strides when it comes to bringing self-driving cars to the U.S. market. The auto manufacturer announced Sept. 16 it was the first company to receive an autonomous driving permit in California.

California Senate Bill 1298 recently went into effect in the state requiring autonomous cars to be registered with the state and have permits for testing as of Sept. 16. In addition to the permit, each car being tested on state roads must have proof of auto insurance and a surety bond of at least $5 million dollars. Drivers for the test vehicles must have completed a training program, according to a statement from the state's Department of Motor Vehicles, and sit in the driver's seat to take over control of the vehicle if necessary. Manufacturers of autonomous vehicles must report accidents to the DMV as well.

Audi has tested its self-driving vehicles where it's permitted in Europe and various states in the U.S., according to the company's statement. The company is excited to begin research on California roads because its Electronics Research Lab is located in the state. It's crucial for Audi to be able to perform tests close to home and its experts.

"Audi is a driving force behind the research taking automated driving from science fiction to pre-production readiness," said Scott Keogh, Audi of America president. "Obtaining the first permit issued by the state of California shows that we intend to remain the leader in this vital technology frontier."

This isn't the first time Audi has taken the lead in gaining autonomous driving permits. According to the company's statement, the company was the first to receive an autonomous vehicle license plate in Nevada as well as the first vehicle manufacturer to test its self-driving car on a newly designated highway in Tampa, Florida.