Are Connected Cars The Way Of The Future? 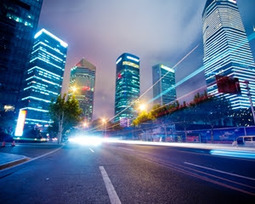 As automobile technology advances, scientists are looking to make a once-dangerous act safer: driving. Millions of cars are on the road everyday in the U.S., for everything from commuting to vacation travel. The probability of a car crash is raised even higher during rush hour and in overcrowded cities. Car wrecks kill 1.24 million people every year, according to the World Health Organization.

Saving lives is the most pressing aim of car-safety developers, who have been working hard to convert the general driving public towards connected cars. These cars operate together as a team through sensors to communicate information about driving hazards, busy roadways and oncoming traffic.

How do connected cars work?
By fitting cars with detection devices, drivers are able to wirelessly connect with others. Not only can a connected car talk with another vehicle, but with buildings, traffic lights, parking spots and emergency services as well.

You would be alerted of a crash nearby, or pedestrians approaching. Your car will also recognize heavy traffic jams so that you can use an alternate route. This will make your drive more convenient and safer for you and other drivers in the area.

What are the benefits?
Improving driver safety is not the only aim of connected car technology. It will also create less pollution because roads will be less congested and cars won't be stuck in traffic and wasting gas. The potential for environmental benefits is a strong reason why some companies are adopting connected cars as drivers become more energy conscious. Traffic congestion leads to 5.5 billion more hours in driving time, using nearly 3 million more gallons of oil every year, according to the Federal Highway Administration.

A more enjoyable driving experience for commuters is also another benefit. There are few things as frustrating as being late for your destination because of a backup in traffic or other unexpected detour. Your car can let you know of potential slowdowns or blockages ahead of time so that you can plan accordingly. This has the ability to decrease driving stress and road rage as drivers can navigate the roads more efficiently.

With the overall traffic and auto system working together, roads, highways, crosswalks, red lights, toll roads and other transportation-related items would additionally be fitted with mobile technology to provide a more comprehensive driving experience. Traffic signals can adjust according to changes in traffic or an oncoming ambulance, which in turn will also notify drivers approaching the area.

How soon in the future?
General Motors has already announced that it will have connected cars on the road by 2016, according to Reuters. Some states already have a similar type of system in place. Over 3,000 cars in Michigan have already been equipped with the technology. Connected cars make up less than 8 percent of total cars in the world, but the number could soon rise as major auto companies warm up to the trend, according to the Economist.

As more people see savings and safety benefits from the new system, auto insurance rates will likely drop as well. The transportation industry as a whole might look very different within the next decade once mobile devices are implemented in millions of cars around the world.