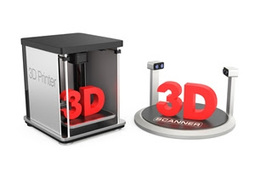 With all the talk regarding car-to-car communication and self-driving technology, a new type of car has already hit the roads: a 3-D-printed car.

3-D technology is still relatively new, with businesses taking advantage of the possibilities for marketing purposes. But 3-D printing can also be used to create objects from scrap without the traditional equipment or materials needed. Weapons, artificial limbs and even medicines can be crafted through the use of this technology. And, in recent days, 3D-printed cars have been showcased to the public.

Local Motor's Strati is built from just 64 parts, while a traditional car is constructed with 25,000, according to Popular Mechanics. While there isn't a printer large enough to print out an entire car in one piece, the Strati was comprised of four separate sections that were then assembled together. The process was so inexpensive, in fact, that the carbon-reinforced plastic shell it was made out of cost $2,200.

Another version of Local Motor's 3-D car was made from just 49 parts and can travel at speeds as high as 40 miles per hour, according to the New York Post. It only took 44 hours to build and runs on batteries. The company estimates that it could begin selling the cars in the near future for as little as $14,000.

Room for growth
By printing a car, manufacturers can focus specifically on custom designs tailored to a certain client. Currently, the cars are made with two seats and are very light compared to a standard automobile. However, once the technology evolves and printers are expanded to accommodate larger objects, the process will be streamlined even further. The printer that created the Strati was only able to produce parts that were​ 3 by 5 by 10 feet, according to Slash Gear.

"People were using 3-D to mimic steel or parts we have now," said Jay Rogers, founder of Local Motors, according to Popular Mechanic. "They're trying to print things that look perfect. The way we're thinking is, stop trying to make the 3-D printer do everything."

By allowing the printer to create the initial frame of the car, including the chassis, body and outline, the additional parts can be added on quickly afterward while also cutting down on the time it takes to design an intricate car from start to finish. In Local Motor's case, the wheels and motor were attached after the shell was printed.

No considerable tests have been run regarding the safety or auto insurance implications concerned with 3-D printing.