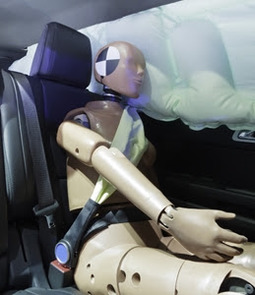 The 2015 Chrysler 200 has earned the Insurance Institute for Highway Safety's Top Safety Pick in August. The newly redesigned model is a midsize car that last year only had a rating of acceptable, according to the Institute's statement.

The Institute uses five different tests to rate a vehicle's crashworthiness, and to be a Top Safety Pick, the car must earn good or acceptable scores in the small overlap protection, good ratings in the IIHS' moderate overlap front, side, roof strength and head restraint tests, as well as a basic, advanced or superior score for front crash preventions.

The 2015 Chrysler 200 did well in all evaluations, and the available front crash prevention system gave the car extra points, the IIHS reported.

Specifically, in the small overlap test, which duplicates a crash where 25 percent of the car's front end on the driver's side collides with a barrier at 40 miles per hour, the driver's space was maintained adequately and there was a low risk of significant injuries in a real-world crash, according to the IIHS. The crash dummy's head was well controlled by the airbag, which stayed in position during the crash. The head was also protected by the side curtain airbag, which prevented the head from coming into contact with the sides of the vehicle. Overall, the vehicle earned high ratings in each category, including structure, restraints, dummy kinematics and injury measures.

According to Chrysler, the 2015 Chrysler 200 has 60 active and passive safety and security features. About 65 percent of the vehicle's body structure is made of hot-stamped, high-strength, advanced high-strength and boron type steels to increase the strength and safety of the car.

If you're in the market for a new car, you're probably interested in the safety features of the vehicle. After you've checked out the 2015 Chrysler 200, don't forget to look into your auto insurance options. Shop around for the available prices in your area by using CoverHound's comparison feature.