Which Metro Area Do Commuters Have It The Roughest? 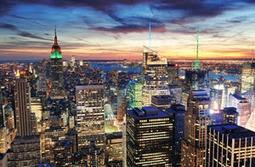 Owning a car is an absolute necessity for many Americans, whose commutes and livelihoods depend on having a vehicle that's both reliable and affordable.

But affordability and efficiency are compromised to different degrees depending where in the country you live. Financial literacy site NerdWallet recently compiled a list of the 15 Worst Cities for Car Drivers, employing a variety of criteria to determine where motorists are getting the least bang for their buck. The metrics included gas prices, auto insurance costs, population density, the average time drivers spend stuck in traffic each year, and lastly, the weather. While some are relatively stable, other factors are subject to wild fluctuations. Gas prices, for example, are steadily on the rise again nationally, as detailed in a recent NPR piece.

What constitutes poor driving conditions?
In factoring in each of these commuting components, the list attempted to answer questions that collectively address the aforementioned issues of affordability and efficiency for each region's driving residents: First, is it expensive to simply own a car? How crowded is the city or metro area? To what extent does traffic play a role? And lastly, how much rain, snow or other inclement weather does the area get, leading to treacherous road conditions and generally drawn-out drive times?

The top five went as follows:

1. Notoriously crowded New York ranked first, thanks primarily to its more than 27,000 people per square mile. Gas prices aren't especially high locally and the precipitation rates are relatively normal, but the average insurance premium - $1,617.41 - drove up the city's overall score.

2. Detroit, home to some of the country's longest-tenured automakers, ranked second almost entirely because the average premium of $4,924.99 paid by drivers is far and away the highest in the country. Factor in the 128 days per year of rain, snow and sleet that Detroit sees on average, and the headaches drivers are faced with become clear.

3. San Francisco ranked third, mostly because it's the second most densely populated city, behind only New York, but also thanks to average gas prices of more than $4.20 per gallon.

4. Chicago is the fourth-worst place to drive, with nearly 12,000 humans per square mile, average gas prices of $4.12 per gallon and insurance premiums that exceed $1,200 per year. The Windy City also gets nearly 120 days of precipitation in an average year, contributing to its infamously shaky road conditions.

5. Washington, D.C., ranked fifth, thanks in part to an average insurance premium of $1,390.88 per year. But the nation's capital earned most of its points because of its traffic, with Beltway-region commuters averaging 67 hours of delay each year, the most of any city on the list.

Seattle, Boston and Miami accounted for spots six through eight on the list, thanks primarily to precipitation, overcrowding and high insurance costs, respectively. Honolulu ranked ninth, mostly because the average gas price of $4.35 was higher than anywhere else in the country. Oakland, California rounded out the top 10, in part due to the 61 hours commuters spend stuck in Bay Area traffic each year.

Cleveland, Los Angeles and Philadelphia accounted for three of the final five spots, along with Portland, Oregon, and Louisville, Kentucky.