Where To Road Trip This Fall 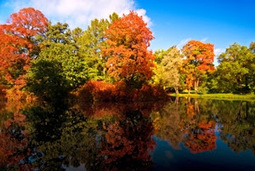 Summer might be prime road trip season, but a fall foliage road trip is a fun way to take advantage of the last of the year's warmer weekends and see a new part of your area. From coast to coast, the United States is filled with bright fall colors in September and October, and each region is unique.

Preparing for the trip
Before a road trip, it's important to make sure everything is in order. First, a pre-trip maintenance check is a good idea to reduce the chances of a breakdown along the way. DMV.org suggested getting the oil changed and checking the break fluid, engine antifreeze and the tire pressure. Making sure the supplies to change a tire are all in the car is a good idea as well.

Any time drivers are exploring a new, unfamiliar area there is a potential of getting lost. The GPS system should be tested to make sure it is working properly before leaving. It's also important to remember that GPS isn't always reliable. In areas where there is limited service, an electronic GPS system may be useless. Having maps of the area is a safe back-up plan.

If something does happen to the car along the way, roadside assistance can help save time, money and stress, according to Money Talks News. There are five main ways people can purchase roadside assistance. Car insurance agencies, auto clubs, credit card companies, wireless service providers and automakers have all been known to offer roadside assistance to customers. The service can help drivers out in the event they need their car towed, run out of gas or even locked their keys in the car.

If something more serious happens, it's important to contact the insurance company right away. Before leaving, drivers should make sure all current insurance information is in the car and is easily accessible.

Once the car is all set to embark on the trip ahead, the only thing left to do is decide where to go.

The Northeast
New England has a lot to offer in the way of fall foliage. From Maine's Moosehead Lake to the Pocono Mountains in Pennsylvania, there is no shortage of bright colors to see.

One of New England's most scenic roads to drive on is the Green Mountain Byway in Vermont. The byway brings drivers through the town of Waterbury in northern Vermont, home to Ben & Jerry's Ice Cream.

"The Adirondack Mountains have one of the longest fall color seasons."

Lake Placid in New York is another great place to admire the fall colors. The Adirondack Mountains have one of the longest fall-color seasons, lasting from late September until mid-October, according to the Adirondack website.

The Midwest
One of the most prominent natural features of the Midwest is the Great Lakes. On Lake Michigan, fall colors can be seen on Michigan's Gold Coast. The Gold Coast runs up the western side of the state, a 550-mile span that brings travelers past views of Lake Michigan, Sleeping Bear Dunes National Park and many forests filled with golden leaves every October, Ways to Explore, a traveling blog, reported.

Lake of the Ozarks in Missouri boasts two peak color seasons, according to OzarkMountains.com. The first one - the "false peak" - comes in mid-October, while the second, called the "true peak" comes at the end of the month.

The South
The most visited national park is the Great Smoky Mountains National Park in Tennessee and North Carolina, according to the National Parks Conservation Association. In 2014, 10,099,276 people visited the park. A wide variety of tree species brings a rainbow of fall colors, from golden yellow to bright red. While some of the roads get a little congested when everyone tries to view the colors at once, there are some out-of-the-way drives that have just as much beauty and a little less traffic, the National Park Service stated.

Further south in the Peach State, a 41-mile stretch of byway curves through the southern Appalachian mountains, according to the Georgia's official tourism site. The Russell-Brasstown Scenic Byway in Georgia is a great place to see late-season colors. October and November bring rich fall colors, which can be seen from many state parks and overlooks along the byway.

The West
The western United States brings a wide range of climates and landscapes. Each of them offers a unique, though equally beautiful, fall view.

Starting in the southern part of the West, New Mexico offers bright gold aspen leaves in September and the first week of October. The perfect place to see them is the 83-mile Enchanted Circle Byway, which goes through some of northern New Mexico's mountains and valleys.

In the northwest corner of the United States, a different fall atmosphere altogether attracts many tourists every fall. The mountains are filled with trees, vines and bushes that take on bright hues every fall. The Olympic Peninsula is home to a gorgeous hiking trail, displaying waterfalls and Royal Basin at 5,100 feet above sea level, according to the Washington Trails Association.

Wherever you decide to drive to explore the fall colors this season, make sure your car is covered. Go to CoverHound's website to compare insurance rates and find the insurance that suits you best.