What To Tell Your Car Insurance Provider After An Accident 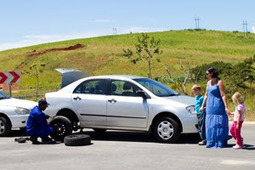 One of worst things that can happen on the road is a car accident. Even small ones are expensive inconveniences and often difficult to navigate.

However, that is what auto insurance is for. Auto insurance is required by drivers so that a car accident doesn't result in repair or medical payments that will dramatically affect your financial stability.

Auto insurance is a good thing to have in those uncertain moments following a car accident, no matter how big or small. Even so, it's difficult to know how or when to contact your insurance agent.

The right time to call
When two or more cars are involved in an accident, insurance agencies say it is crucial that they are called, according to the Livingston Law Firm in Texas. Most insurance providers specifically state that, in the event of an accident, the policyholder must notify the insurance agent. This is especially true when multiple cars and people are involved.

According to Consumer Reports, injuries often surface a day or two following the accident and cars can be more damaged than they initially appear. Because of these factors, it is important that the insurance agent be contacted right away. Many insurance providers have stipulations about how soon they should be contacted.

"Claims should be filed within 72 hours of the accident."

All Law explained that claims should be filed within 72 hours of the accident. However, the sooner insurers are contacted, the better. If a claim isn't filed within a quick enough timeframe, the insurance provider may be forced to limit the benefits otherwise available.

When not to call
However, there are times when calling your insurance agent isn't a good idea, according to the Chicago Tribune. Filing too many claims is a good way to increase insurance rates. In some cases, too many claims can get a policyholder dropped from the insurer when it comes time to renew.

According to Consumer Reports, a one-car accident at a low speed doesn't always necessitate a call to the insurance agent. In these cases, it will probably do more harm than good. The damage is probably minimal and repairs are likely affordable. However, filing a claim in this situation will likely mean a rise in rates, which will affect insurance costs for years ahead. This will end up being more expensive than just paying for the repairs out of pocket.

Daily finance also warns of drivers who already have moving violations that might affect their rates. Adding a claim to the violations is good cause to increase rates. If the accident does not involve any other people or cars, a driver with a record might do best to leave the insurance agent out.

Know what to say
When filing a claim or reporting an accident, it is important to provide as many details as possible. Edmunds.com suggests drivers keep a notebook in their glove compartment to write down details such as the other driver's name, car and insurance information. Taking pictures of the damage will also be helpful. Consumer Reports advises drivers draw a diagram of what happened in the accident as well.

On the other hand, in those situations when a driver is unsure about whether or not the insurance agent should be called, it's best to keep details at a minimum. The Chicago Tribune explains that even calling an agent to ask for advice in a situation could lead to a rate increase. This is because some agencies require all calls of this sort to be recorded, whether or not an accident is reported or a claim is filed.

Likewise, if the insurance agency of the other driver calls, it's best to give as little information as possible, according to All Law. The basic information, like how and when the accident occurred and who was involved, is good to disclose. However, details beyond that, including damages done to the car and injuries sustained, should be saved until a later date. They will likely be addressed in a written demand for compensation.

Getting into a car accident and dealing with insurance policies afterward is often a confusing and frustrating process. However, being informed about how to call, when to call and what to say will reduce the stress that comes after such an event. Make sure your car insurance policy is the right one for you by comparing rates on CoverHound's website.