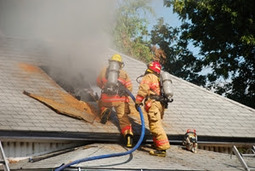 The holidays are a joyous time that is often filled with family, friends and good food. Part of those filling meals that everyone remembers has a lot to do with the preparation and a sometimes a delicious turkey. As the traditional feast of Thanksgiving, more than 46 million turkeys will be eaten around the holiday, according to the National Turkey Federation. Millions of Americans will be faced with the life or death choice of consuming either white or dark meat of the turkey, but will remain blissfully ignorant of the dangers involved with preparing the meal.

According to State Farm Insurance, more fires occur on Thanksgiving as a result of cooking turkey than any other holiday, wrecking havoc on homeowners insurance policies. In 2013, Thanksgiving was the leading day for house fires. To avoid this holiday disaster next year and making an insurance claim, here are a few things to know about fire insurance coverage:

Where there's smoke, there's fire
Most homeowners insurance policies will cover cases of fire damage. If a fire occurs in the home, basic policies will usually cover the costs of property damage or loss of belongings.

If a house burns down, there is more than the loss to deal with. The residents will need someplace to go while they recover what was once their home. In addition to helping cover the costs of repairs and rebuilding, fire coverage will reimburse homeowners for their living expenses when they can't be at home.

For some homeowners without insurance, a fire can lead to financial ruin. A person's home is likely to be their largest asset and often is a significant part of wealth. To lose a property unexpectedly with no safety net could be a disastrous financial situation. While fires don't happen to everyone, they can and do happen. To be protected, check with a homeowners insurance company to find a policy with fire coverage.

Protect your home
While most homes are equipped with smoke alarms and detectors, these might not be enough to protect a home, since the detector won't help put out a fire. Additionally, even the best smoke alarms might not be able to alert homeowners that there is a fire somewhere, because fires can spread rapidly. Having a smoke detector is essential, but homeowners should not make the mistake of thinking it will be able to give enough warning and time to put out a fire.

When it comes to big meals, be prepared in case something goes wrong with the cooking. It's no fun to have this traditional meal spoiled by a fire. Most commonly, it is the deep-frying process that causes house fires on Thanksgiving. If you plan on cooking the turkey in this way, be sure to do it outdoors and away from anything flammable. Also, dipping a frozen turkey in sizzling oil is a recipe for disaster, not crispy or golden skin. Thaw the bird and dry it thoroughly before giving it an oil bath. Never leave it unattended and have an extinguisher nearby.