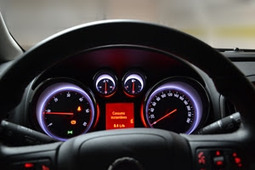 Vehicles on the road are getting costlier, according to a recent study from the National Automobile Dealers Association Used Car Guide.

While the average age of vehicles are at a record high, so too are the prices for used ones. According to NADA, used vehicle prices increased 3.7 percent in March on a month-over-month comparison. The increase comes after prices rose 2.2 percent in February compared to January.

As the winter weather was likely to blame for the increase prices, NADA expects they will retreat 1.8 percent to 2.2 percent in April compared to March.

Importance of listening to dashboard warnings
As a vehicle is likely one of the largest purchases someone will make in their lifetime - and as prices are on the rise - it's important to listen to warning systems.

According to the 2014 CarMD Vehicle Health Index, car repair costs increased 6.7 percent in 2013.

"Thanks to today's technology, consumers and fleet managers have access to more information than ever before to help them take a proactive role to extend vehicle life and minimize cost of car ownership," says Doug Sobieski, CarMD's chief marketing officer. "CarMD's data highlights the importance of making minor adjustments to your car maintenance and repair routines to account for driving habits, type of vehicle and even climate. This CarMD Vehicle Health Index demonstrates how ignoring dashboard warning lights can drive up the cost of ownership with increased fuel usage and a domino effect on needed repairs."

The index analyzed more than 145,000 repairs. The data showed that the most common reason an engine light came on - 40 percent of the time - was due to the oxygen sensor. The report noted that this can lead to a number of issues like a damage to the catalytic converter, as well as lead to a 40 percent reduction in gas mileage if the problem is ignored.

Those considering how the cost of repairs will impact their wallet are also reminded to assess their auto insurance coverage. As policies differ from provider to provider, finding a better deal can be done through easily comparing auto insurance quotes online.