The Threat Of Tornado Season 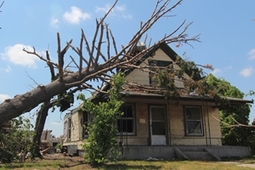 Spring's changing climate means that tornado season is arriving, especially for homes that sit in "Tornado Alley." Though the boundaries aren't entirely agreed upon, The National Climate Data Center names Tornado Alley as the U.S. southern plains where the most tornadoes are experienced. Tornado History Project data explains that only 2 percent of tornados led to human deaths, but the numbers for injury and damages to homes are much higher. Home insurance usually covers damage caused by storm winds, but it's important to revisit your policy to fully understand it. Find out ways to protect your home and family.

Stronger foundation
According to the Insurance Information Institute, the most costly tornado hit Tuscaloosa, Alabama, in April 2011. The devastation cost $7.5 billion in insured damages. Fortunately, there are ways to cut down on the cost of damages and protect your house. Dr. Tim Reinhold, the chief engineer and senior vice president of research at Insurance Institute for Business & Home Safety says that stronger construction can decrease damage caused by storm winds and tornados.

Reinhold spoke at the February 2015 National Tornado Summit in Oklahoma City. He explained on behalf of the IBHS that manufactured homes need to be built to the standard of the U.S. Department of Housing and Urban Development code to best reduce property damages. The HUB Code guidelines can be found on their website.

Reinhold is also working on an updated construction guide with the Applied Technology Council to help the areas most prone to tornados. Additionally, he suggests that a continuous load path will greatly reduce the damages caused by tornados. A continuous load path serves as a strategy for holding the home together when it faces the strength of high winds. It requires each level of the home being securely attached to the one above and below it.

Take action now
If waiting on codes to change doesn't fit your idea of safety, then there are some options you can implement immediately. A strong window-shutter system can decrease the chance of your windows being blown open during a storm. It's important to keep them shut to prevent debris from flying in or the wind from pressurizing your home.

To keep your home secured to the ground, there are cable mechanisms that essentially tie all of the floors of your home down to the foundation. This process is similar to the continuous load path in that all levels of the home are secured together.

A common way homes get damaged during tornados and other storms is by falling trees. Regularly maintain the landscaping around your home, and trim down tree branches that are looming too near your house. IBHS also recommends having front doors with at least three hinges and a dead-bolt lock to better secure the door to the frame.

Roofs are especially susceptible to the dangers of strong winds. Make sure old roof coverings are removed down to the sheathing. Replace damaged sheathing and install a roof covering that is capable of resisting high winds.

Looking to the future
The Safe Building Code Incentive Act is being considered as a mean to having federally regulated building codes according to Claims Journal. Furthermore, Reinhold says that the most efficient way to make these standards happen is for homeowners and buyers to demand them. IBHS is among many organizations attempting to raise the minimum standards for building codes, but they need the help of the public. Their effort involves gathering accurate data so that society can be informed and help this mission.

Use CoverHound to find the best home insurance rates.