The Case For Motorcycles Lane Sharing 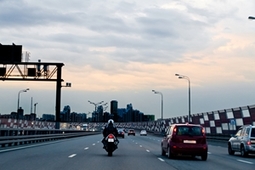 Currently, California is the only state that legally allows lane splitting for motorists, but that might change. Lane splitting, otherwise known as filtering or lane sharing, is the act of motorcyclists riding in the middle of two lanes of traffic while traveling in the same direction. Two bills in Texas that propose legalizing lane sharing are awaiting lawmakers' consideration.

Motorcyclist safety
The argument for its legalization is that filtering is safer for riders and more convenient for car drivers. Accidents involving motorcycles are hardly ever minor, and that risk factor is considered in determining the rate of motorcycle insurance. In fact, some insurance companies will lower the rates if bikers take extra motorcycle driving classes in order to promote safe riding practices.

The argument by those proposing the bills in Texas and by the American Motorcyclist Association is that lane splitting will contribute to decreasing that risk for an accident while also serving as a convenience for car drivers. The stop-and-go nature of traffic congestion is extremely dangerous for motorcyclists.

According to a report prepared for the National Highway Traffic Safety Administration, 59.2 percent of all motorcycle accidents occurred in moderate to heavy traffic. Those conditions are prime for a rear-end collision, which has more potential for a serious injury with motorcyclists than it does with cars. Filtering will allow motorcyclists to ride to the front of traffic, avoiding sitting bumper to bumper in a long line of four-wheel vehicles.

Roadway convenience
Lane sharing not only allows motorcyclists to escape the unsafe conditions of stop-and-go traffic, but going to the front of traffic means time saved for everyone. Motorcycles won't be waiting in line with other vehicles, so that means there are fewer drivers other cars have to wait on.

For those unfamiliar with motorcycles, it might be hard to accurately visualize the filtering process. The proposed bills in Texas are not invitations for riders to weave in and out of traffic. Additionally, other areas such as European countries have long allowed filtering, exhibiting that this practice can be successful for all roadway vehicles.