The Average Age Of Cars On The Road Continues To Grow 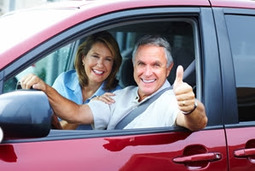 When does your car reach old age? A recent study from IHS Automotive says the lifespan of the average car is growing. This year, for cars and trucks both, the average age is 11.5 years - 1.5 years older than cars in 2008.

Not only are cars remaining on the road longer, but people are holding onto their cars longer. The average length of ownership of a new car is almost 6.5 years; just over 5 for a used one - two years longer than in 2006. Why is this?

There are two explanations for this. First, the economy can be taken into consideration. It's clear that the recession affected car sales greatly; car sales went down in 2008 and 2009, whereas car age and length of ownership went up.

But another reason is simply that automakers are engineering better quality cars than they used to make. The stigma of the end-all 100,000 mile mark has stuck with some people, but cars are increasingly able to fly past that milestone and reach the next: 200,000 miles.

"As long as we have tracked average age, it has gradually risen over time due to the increasing quality of automobiles," Mark Seng, global aftermarket practice leader for IHS Automotive.

Even though car quality has increased, it's pertinent to note that upkeep is still important, according to CBS MoneyWatch. To make sure your car lives a long and healthy life, be sure to change your oil on time, change your tires when they need it and pay attention to the quality of your brakes.

"Every new car today is built to last a quarter of a million miles," AAA Manager of Technical Services Mike Calkins told CBS News. "But along with that capability, you need to pay more attention to maintenance."

So, how is your car doing? To protect the car you're sure to have for years to come, compare auto insurance quotes at CoverHound.