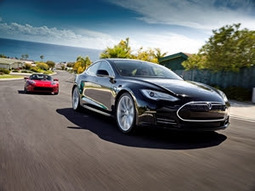 Tesla revealed the Tesla Model X Sept. 29, the company's newest car since the Model S, released in 2012. Originally expected to be available in 2013 and announced in 2012, Tesla fans have been waiting for this release for years, according to ExtremeTech.

Now that the waiting is over, people have been pre-ordering their Model X. So far, more than 31,000 people have reserved their car, BGR reported. However, Tesla expects many people won't be getting theirs until late 2016.

The Model X is the only electric SUV on the market and will be until 2017 when Audi's Q8 E-tron becomes available, according to Edmunds. It will seat seven passengers with the option to fold down the back row for extra storage, The Market Business observed.

Falcon doors
When the back row is used for seating, it will be easily accessible through its falcon doors. They are hinged at the top of the car, allowing full access to the car's interior. According to Vine Report, the doors will still be able to open properly even in garages or crowded parking lots.

While the falcon doors allow easy access to the back row of seats, Top Speed explained they could cause some problems. The design of the doors takes up much of the car's roof, which will make adding storage racks to the top of the car impossible. Top Speed argued this will be frowned upon by Tesla's target market - travelers who want space for luggage, skis or other equipment, and soccer moms who want extra storage on top of the vehicle.

Ludicrous Speed
Whether or not the falcon doors will help the car's sales, there are plenty of other features to which future Model X owners are looking forward. According to Edmunds, the Model X will be able to accelerate to 60 mph in 4.4 seconds, which is comparable to the Model S. The Market Business reported that, for an extra $10,000, the Ludicrous Speed upgrade could cut the acceleration to 60 mph down by more than a second. This is impressive for a vehicle that will weigh more than 5,000 pounds, according to Tech Insider. This is about 10 percent more than the Model S.

Battery power
While it was originally reported by Edmunds to have the same two battery options as the Model S - a 60 kilowatt-hour battery and an 85 kwh one - Automobile Magazine explained that both versions of the Model X - the P90D and the 90D - will have a 90 kwh battery. The cars will have a driving range of 257 and 250 miles, respectively.

"The Model X is the only electric SUV on the market."

Price tag
According to BGR, the Signature Series Tesla Model X will cost about $132,000, with options to add or upgrade certain features for added expenses. With every upgrade, the final price will be about $144,750.

If sales of the car follow the same trends as the Model S, the price won't likely hinder Tesla fans from purchasing their own Model X. According to a press release from Tesla, Model S sales were the highest they've been in the second quarter of 2015 with 11,507 Model S's delivered.

Drivers of the new Tesla Model X will want to have the best car insurance for their new car. CoverHound estimates a 45-year-old, married male living in San Francisco would pay on average $3213 per year for a policy. Because the Tesla Model X is so new, the model is not online yet, but if you call CoverHound at (866) 278-7881, we can give you a quote.