Surge Protectors Are Necessary For Homes 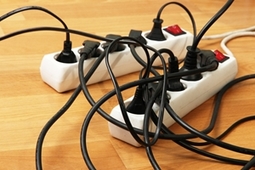 Consumers are increasingly owning more electronic devices every year. According to a 2013 study by the NPD group, the number of Internet-connected devices in U.S. households is more than 500 million. There are 5.7 devices per household, with the most common being the personal computer. Ninety-three percent of households own a PC, and that number will not decline anytime soon according to John Buffone, an industry analyst for NPD. These figures do not account for common items such as lamps, fans, window air units and refrigerators.

These devices are not advanced enough to be solar powered or run on air, so that means charging cables are required to provide power. With an ever-increasing number of devices, households are using more electricity than originally designed for. According to the National Fire Protection Association, more than half of U.S. households were built 30 or more years ago. The wiring in these houses cannot properly handle all the electricity needed to power everything plugged in. According to the U.S. Energy Information Administration, the second-largest use of electricity is the powering of electronic equipment.

Some households also make the mistake of not strategically planning the use of outlets. Large appliances such as fridges are recommended to be plugged into their own outlet because they use so much energy. A common solution to the lack of outlets is the use of power strips. They are cheap, readily available and for the most part, safe. But a power overload may occur, which may lead to electrical fires. The NFPA estimated 47,820 household fires from 2007 to 2011 involved electrical failure or malfunction. Forty-eight percent of those fires were the result of electrical distribution, meaning some areas of the house were using too much electricity.

Common signs of electrical overload include flickering lights, warm cords and wall plates, sizzling noise originating from outlets, constant circuit breaker trips and blown fuses. House fires during that period caused $1.5 billion in direct property damages. Fires are typically covered under hazard insurance, part of the homeowners insurance provided by leading insurance agencies. There is an important preventive step homeowners can take to reduce the risk of electrical fires, and that includes the use of surge protectors.

What is it?
A surge protector should not be confused with a power strip, though they look very similar. Power strips are merely extensions of outlets and do not offer nearly the level of protection surge protectors do. Surge protectors not only provide multiple outlets, but considerable protection from voltage spikes as well. These short energy spikes may be caused by lightning storms, tripped circuit breakers and short circuits, among others. There exists the risk of voltage spikes causing internal computer parts to overheat and lead to a fire, that if not properly contained, could dangerously spread.

What to look for Homeowners should look for a surge protector that best suits their needs. These appliances vary in the amount of port offerings. Some households may prefer fewer ports to more. Different devices might call for different protectors as well. The amount of protection needed for a bedside lamp will not be the same as home theater system requires. Most importantly though is the joule rating offered. According to CNET, the higher the joule rating, the better the protection.

Brand and price
Some manufacturers believe so highly in their product they'll offer warranty devices plugged into the surge protector. If those devices are damaged, manufacturers will cover repairs up to a certain amount. Homeowners should check to see what and how much the warranty will cover. In terms of price, surge protectors are relatively affordable. However, cheaper is not always better when it comes to protecting valuable household devices.

Electrical fires stemming from power overloads are not a common occurrence, but they do happen. Homeowners should always check outlets for too much usage and consider using surge protectors to offer another layer of safety. Households are advised to head to CoverHound if they are unsure of insurance policies or looking for new policies that offer hazard insurance.