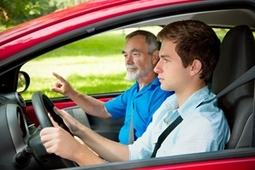 A new study conducted by the University of Iowa Public Policy Center revealed 60 percent of teenage automobile accidents were the result of distractions. Males were involved in 52 percent of the crashes, while females were involved in 48 percent. The organization's Chris Carney told The Daily Iowan this study was a first because previous police data showed only 14 percent of crashes were the results of distractions. Carney believed drivers were afraid to admit they were on their phones, or did not even realize they were distracted.

The study revealed 58 percent of drivers were distracted in the moments before an accident. Interacting with passengers was found to be the leading cause of accidents, followed by cellphone usage.

Teenage drivers already have high premiums because of their relative lack of driving experience, according to State Farm Insurance. In fact, automobile accidents are the leading cause of death for teenage drivers, according to the Centers for Disease Control and Prevention. As always, there are preventive steps drivers and their families can take to reduce the risk of accidents and in turn, lower their insurance costs. However, if teenagers get into accidents, their premiums will rise. How much they rise depends on the family's auto insurance policy.

Limit cell phone usage
States have been enacting laws to curtail the use of cellphones while driving. Using a cellphone is not explicitly illegal; instead, 11 U.S. states plus Washington, D.C. prohibit the use of hand-held devices while driving. Parents should make it a point to not use phones while driving. Unfortunately, that is easier said than done, as some drivers constantly use built-in GPS to get around. Hands-free technology such as Bluetooth or car mounting kits are popular options to avoid staring down at a phone. However, they are not perfect solutions by any means. The Economist, citing a study by Carnegie Mellon University, found talking on the phone, even through Bluetooth, makes drivers even more accident prone because of decreases in brain activity. Teenagers especially should not talk or text while driving.

Implement new technology
Mobile applications are making it easier for parents to protect their kids, and this includes distraction-free driving. One of the more highly praised services is DriveID from Cellcontrol. Parents purchase the service and attach the accompanying device to the inside of the car's windshield. It then wirelessly communicates with the teenager's phones. After the app is installed on the teenager's phone, parents can customize numerous options, such as disabling texts and calls, restricting the use of apps, vehicle motion and tampering alerts. Parents have full control from their home computer.

Sit-down conversation
Technology alone cannot solve everything. In many instances, they're merely stopgap measures. There is no application to prevent teenage drivers from quickly glancing over and talking with their passenger. No matter what, family conversations are paramount for parents to remind their children the dangers of driving while distracted.

Each family is different and will choose their own way to discuss such serious topics. There are plenty of options available for families to help reduce the risk of their teenagers getting into accidents.

For families that want to compare auto insurance policies, CoverHound offers a user-friendly interface to look up that information and more.