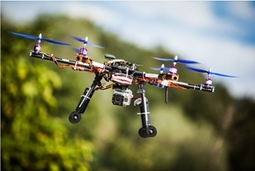 According to a press release from State Farm, the Federal Aviation Association has given the company the green light to employ Unmanned Aircraft Systems, commonly referred to as drones. This makes the Bloomington, Illinois-based company the first to explore the unchartered insurance territory of using drones for claims management. The insurance giant will begin developing and testing prototypes at a private site somewhere around their Bloomington Headquarters, which will eventually pave the way for real-time commercial application.

"The potential use of UAS provides us one more innovative tool to help State Farm customers recover from the unexpected as quickly and efficiently as possible," Wensley Herbert, State Farm operations vice president for claims, said in the press release. "We will continue to provide the same personal, good neighbor service State Farm is recognized for, with assistance from these high-tech devices."

Using unmanned drones
Whether called Unmanned Aircraft Systems or Unmanned Aerial Vehicles or simply drones, these remote controlled devices are going to change the landscape of insurance claims adjusting. The Claims Journal reported drones are already being used to enhance public safety, support agriculture, help the environment, monitor the climate and mitigate and monitor disasters. When it comes to insurance purposes, drones can provide unique benefits.

Picture a devastating storm destroys a small town in a rural area. Power lines and tree branches block all the access roads into town. Ambulances and firefighters can barely drive down the roads. Crews are working around the clock to clean up the scene. In a scenario like this, it can take days maybe even weeks before the insurance agents can assess the situation. Meanwhile, homeowners and business owners have to wait months before their policies are paid out. A time like this requires instant eyes in the sky to accurately calculate the damage, and thanks to the FAA ruling, that is exactly what is going to be happening soon.

Insurance agents are already starting to dip their toes in the drone waters. Approximately 2,600 drones currently have insurance coverage from an insurance broker in Colorado, Insurance Networking News reported. The company's owner and president, Terry Miller said he had to create a set of rules for their drone clients, who they've been insuring going on four years now.

Many possibilities exist within the insurance realm for utilizing these devices, including surveying a catastrophe within hours of the event happening, while keeping the agents away from any potentially harmful or dangerous situations that might still be lingering at the disaster site. Insurance companies can use drones to get a clear picture of a car dealership with a lot full of dented and dinged cars after getting hit by a hailstorm or a homeowner who lost a portion of their roof after a windstorm.

Drones in flight
A final ruling from the FAA on the governing regulations for drones is still some time away, although for the moment, the FAA has not prohibited purchasing insurance for drones. Despite the aviation agency's heel-dragging, it hasn't stopped enthusiasts and businesses from using drones. Insurers, aviation lobbyists and academics estimate there are already more than 7,550 drones currently in the air, according to Insurance Networking News.

Jason Wolf, a property defense attorney and shareholder at the Florida-based firm of Koch Parafinczuk & Wolf, anticipates the use of drones to be so extensive within the insurance community that their usage will become an everyday skill for agents. According to the Claims Journal, he stated that he thinks learning to use drones will be akin to agents learning to shift from pen and papers to incorporating computers into their business.