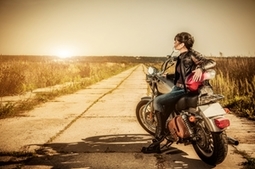 Skully, Inc. recently raised roughly $11 million in investments for production of its smart helmet, according to Marketwired. This revolutionary new helmet will include a wide-angle rear-mounted camera that should eliminate dangerous blind spots. In addition to the camera, the helmet will also come with Bluetooth capabilities that sync to smartphones and it will have a proprietary navigation system that displays a map in the bottom left-hand corner of the visor.

"This is a landmark time for Skully's growth," Dr. Marcus Weller, founder and CEO of Skully, announced in a press release. "Funds from this round will help carry Skully through its manufacturing milestones and accelerate our technology roadmap. I couldn't be more excited for the future of Skully and the wearable display industry."

With helmet technology virtually untouched for the past 50 years, the San Francisco-based company hopes to up-end the industry. Forbes reported the company plans on releasing a prototype of their AR-1 in March, and is expected to fulfill customers' pre-orders by this summer.

The one noticeable downside thus far is the short battery life, - a mere nine hours. The price might also be a hindrance for some consumers, coming in at a hefty $1,500 - well over the price of a normal helmet. But according to BloombergBusiness, Weller said it's worth it, since traditional foam and plastic helmets "do relatively little to actually prevent the accident in the first place."

The technology, while still in its infancy, has repercussions for motorcyclists and bicyclists. The augmented reality that Skully promises should provide additional safety features that allow bikers and cyclists the ability to see traffic signs and navigate without having to take their eyes off the road in front of them.