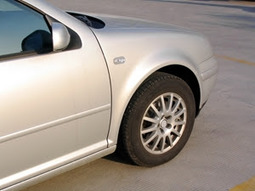 In the not-so-distant future, your car may be able to park itself with just a swipe of your thumb on your phone, according to the Minneapolis Star-Tribune.

For example, imagine you're heading out during rush hour and don't want to worry about the hassle of spending precious time searching for a parking spot only to have it taken from you at the last second. A French company called Valeo has developed technology that enables a car to identify an open parking spot and drive itself to park.

Using 12 sound-wave sensors, the car can detect oncoming cars and hazards that could lead to a wreck. The car is detailed enough that it can park within centimeters of other cars without damage to either vehicle. Equipped with cameras and scanners, the technology is known as "Connected Automated Valet Parking."

The technology is not fully functional on its own, as drivers would still have to drive toward a parking garage or open parking area before the car will be able to detect an available spot. Also, parking garages will have to be equipped with sensors so they can communicate with the self-parking cars. The car drives safely at 3 mph and can avoid hitting other objects that might lie in its path.

"The car is able to do a much better parking maneuver than we as humans," said Valeo Project Manager, Amine Taleb, according to the Star-Tribune.

How will self-parking cars affect insurance?
One of the benefits of self-parking cars - and automated cars in general - is that they are safer and aren't at risk of human error. In the coming decades, we could see fully driverless cars, as evidenced by both Google and Nissan putting new models on the road, according to PC Magazine.

New technology in driving systems cuts down on common human driving habits, such as road rage, speeding and slow reaction times. Larger, more dangerous issues, like drunk driving and falling asleep at the wheel, can also be eliminated. The lack of human mistakes is predicted to lead to fewer accidents on the roadways, though automated cars are currently not allowed on public roads unless being tested. Real numbers will only be realized once state and federal regulators agree to sign off on many of these new technologies.

If there are fewer car crashes, then there will be fewer liability claims and less risk for insurance companies to cover. This will likely lead to decreases in auto insurance rates for millions of drivers across the U.S, according to the Insurance Information Institute.

While liability claims following accidents will decline, insurance rates regarding natural damage from weather conditions will decrease as well.

"Coverage for physical damage due to a crash and for losses not caused by crashes but by wind, floods and other natural elements and by theft is less likely to change but may become cheaper if the potentially higher costs to repair or replace damaged vehicles is more than offset by the lower accident frequency rate," according to the III.