Rewired: One Surefire Way To Save On Homeowners Insurance 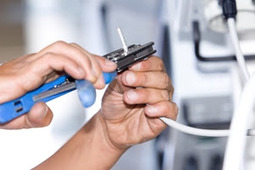 There are several ways to improve a home that can cut down the cost of monthly homeowners insurance premiums. Insurance companies typically will do a risk assessment to decide what type of risks are present in a home. Newer homes with better safety features and modern upgrades are often eligible for discounts that can substantially reduce monthly payments.

The biggest danger of old wiring can be the higher risk of home fires. According to State Farm Insurance, a home fire is reported every 87 seconds, making them very common. Electrical problems cause 29,000 fires every year, State Farm found. More than half of these electrical fires are caused by home wiring.

Aluminum wiring
Homes built between 1965 and 1973 have a great chance of being constructed with aluminum wire. If a home is found to have aluminum wire, getting homeowners insurance can be more expensive because of the increased risk of a home fire. Before it was realized that aluminum wire was a fire hazard, developers would use it as an electrical conductor. Since then, homes have typically been built with safer wiring.

In addition to being a higher fire risk, aluminum wiring does not conduct electricity as well as other metals. It is also less flexible and more vulnerable to corrosion, meaning that it might need to be replaced sooner than other types of wiring.

When to rewire
If you're a homeowner, rewiring your home could make it significantly safer and bring you major savings on your homeowners insurance policy. However, many homeowners don't rewire because of the cost. In some cases, the dangers old or corroding wiring leaves little choice about the investment. There are a few warning signs that could indicate that wiring is on its way out and could be sparking problems in a home.

Older homes should be inspected by a qualified technician who can assess the state of the wiring. A homeowner should be able to tell if their home is in need of rewiring if there are frequently blown fuses, flickering lights, sizzling or burning sounds, loose outlets or shocks when plugging into an outlet. When these signals start to happen, having a professional rewire the home is the best way to avoid a home fire or other electrical problems.

The savings on new wiring can make a huge difference in the monthly expense of homeowners insurance. Not to mention that knowing a home is safer can bring families peace of mind.