North Carolina Set To Crack Down On Mopeds 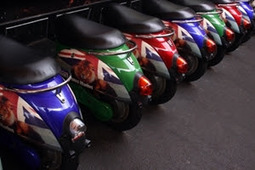 After years of haggling over the issue, the North Carolina Senate passed a bill by a vote of 39-8 requiring riders to buy minimum liability insurance before taking their bikes for a spin, WRAL, Raleigh, North Carolina's CBS affiliate reported. If signed into law, riders will need to purchase the insurance - that is, $30,000 for injury or death of one person, $60,000 for injury or death of two or more people and $25,000 for property damage.

Moped drivers would have until July 1, 2016, to obtain liability insurance. The measure comes just a year after the state passed a law requiring moped registration.

Moped deaths
While not as powerful or fast as a true motorcycle - moped cylinders are typically only 50 cubic centimeters and can only reach a max speed of 30 mph - a number of states are seeing a spike in moped-related fatalities, especially North Carolina's neighbor to the south.

South Carolina reported 37 moped deaths in 2013, with the numbers more than doubling during a six-month period in 2014.

Meanwhile, North Carolina saw 115 fatalities from mopeds between 2009 and 2013, most of which occurred on high-speed roads.

"Most [moped] fatalities are on higher-speed roads, and it's kind of a no-brainer," Kelly Thomas, North Carolina's motor vehicle commissioner, told The News & Observer. "A low-speed vehicle on a high-speed road will lose."

Other officials noted that mopeds can just be hard to see at night.

Loopholes to close
A 2011 Governors Highway Safety Association report on traffic deaths noted the rise in moped fatalities could be due to loopholes that states like North Carolina are trying to close. Before 2014, riders in Indiana weren't required to register their mopeds or have a driver's license. Meanwhile, South Carolina's Senate is still battling with a technicality that allows moped riders to get away with drunk driving, according to Insurance Journal.

Since mopeds generally get an average of 80 to 100 miles to the gallon, officials like Adkins attribute seeing more of the cycles on the road whenever gas prices surge to record levels much like they did in 2012.

One safety tip to keep in mind when sharing the road with a moped is to remember just how slow they are. Many collisions occur because car and truck drivers assume mopeds are faster than they actually are and sometimes don't give enough time to brake before it's too late.

If you need motorcycle insurance, CoverHound provides fast and cheap quotes on its easy-to-use website.