Motorcycle Lane-splitting Safe, According To Study 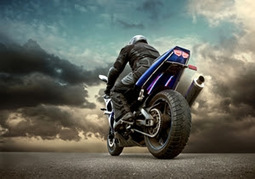 A new study by the University of California, Berkeley found that lane-splitting may be safer for motorcyclists than originally thought. In addition, the practice resulted in fewer instances of serious injury in riders. In California, lane-splitting is legal only because there's no mention of it in state traffic law. With this new research, however, Golden State politicians are hoping to not only make it legal, but to regulate it.

After reviewing 6,000 motorcycle-related accidents between June 2012 and August 2013, researchers discovered that only 1,000 of the incidents involved lane-splitting. These findings are crucial to California state legislators, who are proposing a new law that would legally allow lane-splitting in the state. Being pushed by three California assemblymen, this legislation would come with two conditions: riders cannot move more than 15 mph faster than surrounding traffic and cannot top 50 mph.

Thomas Rice, of the Safe Transportation Research and Education Center and author of the study, also found that the risk of injury and accident increases with higher speeds. Motorcycle speed was a stronger predictor of head, torso and extremity injury than overall traffic speed. Compiling data taken by California Highway Patrol officers at crime scenes, Rice also discovered that lane-splitters were less likely to be speeding, less likely to be under the influence and wore better helmets. On the other hand, lane-splitters were more likely to rear-end another vehicle than non-lane-splitters.

Saturday was the day of the week with the highest rate of accidents and 90 percent of riders involved in the accidents that were studied were male. Furthermore, 60 percent were under the age of 45. Lane-splitting doesn't benefit just motorcyclists, however. When riders drive between the two lanes, they are effectively reducing traffic congestion, as well as decreasing carbon emissions, according to a 2012 study by Transport and Mobility Leuven, a Belgian research company.

Once considered dangerous and unfair by many riders, lane-splitting has advantages that will assist motorcyclists and car drivers alike. If this new legislation is passed, California would become the first state to accept this practice.