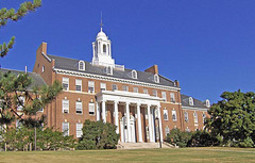 When you think of auto insurance, the first that comes to mind is probably a bill. When you hear “student auto insurance,” that thought turns into a very expensive bill. You might be asking yourself why there’s such a discrepancy between regular auto insurance and student auto insurance premiums, but in the insurance world, new drivers are considered a liability. Why? A driver’s age influences car insurance rates. As a young motorist is usually inexperienced, their risk assessment is higher, particularly for male drivers (sorry, men!).

Curious as to which US cities charge the most for car insurance? Let’s take a look below.

Ensuring Your Protection
When you take a look at the analytics, you will find that every state across the US (except for New Hampshire) requires that motorists carry some form of auto insurance. Mandated by state law, auto insurance is meant to protect its carrier not just in the event of an accident, but in the case of auto theft, vandalism, and against the under or uninsured. Even though 49 states require drivers to carry insurance, not all states mandate their drivers carry the same amount, or even the same policy. Nor are the insurance costs equal, even within the same state.

Insurance agencies have found that motorists traveling and living in urban areas are more likely to be involved in a vehicle-related incident than those living in rural areas. According to the Insurance Information Institute (III), Detroit, New Orleans, Grand Rapids, Newark and Baton Rouge are the most expensive US cities to register for car insurance. If you’re a student living in these areas, or you have a teenager that has just gotten their license and needs to be insured, you already know that a change to your policy or enrolling in a new one is going to be costly.

1.) Detroit, Michigan
The average annual auto insurance price in Detroit topped out at $10,723. Yikes! Unlike the less expensive states, Michigan has in place a no-fault insurance system. A no-fault insurance system is an auto insurance program that grants carriers recovery in their financial losses after an accident, no matter who was at fault. In its strictest sense, as reported by III, the no-fault insurance system only applies to state laws (like Michigan’s) that both impedes the right to sue, and takes care of the financial payment of no-fault first party benefits. Once the beating heart of the auto industry, Detroit is now a city known for its high crime rate. In 2013 alone, 11,754 cars were stolen with 336 total accidents taking place in 2009, as reported by the Center for Disease Control and Prevention (CDC). With these high numbers, and 76 of those accidents involving young student-aged drivers, be it at the high school or college levels, (ages 15-24), auto insurance rates skyrocket.

2.) New Orleans, Louisiana
The annual premium cost for New Orleans natives is $6,000 less than Detroit’s, coming in at $4,310. According to Simien & Simien, LLC, in 2012 New Orleans had a total of 722 fatal car accidents. Not only this, but Louisiana has set up a law that allows motorists involved in vehicle accidents to sue insurance companies. In an effort not to get sued, Louisiana insurance providers set up insurance programs that provide a wealth of protection, which directly affects the cost of the insurance premium.

3.) Grand Rapids, Michigan
Unlike the vast student auto insurance monetary differences seen between Detroit and New Orleans, there is only about a $300 difference between New Orleans and Grand Rapids, with the average annual car insurance price costing $4,042 in Grand Rapids. According to Property Casualty 360, the Grand Rapids area suffers from poor weather conditions, which in turn affects the roads leading to corrosion and deterioration. Property Casualty also reported that Grand Rapids drivers spent a total of $1,027 a year due to pothole related incidents. When you are a new driver involved in an accident, your student auto insurance premiums are going to skyrocket once you file a claim, and depending on whether you’re male or female, your premium costs may rise even higher.

4.) Newark, New Jersey
Coming in fourth is Newark, New Jersey. Like Michigan, the Garden State has a no-fault law insurance system. Newark motorists pay on average $3,525 annually for auto insurance. Also like Michigan, New Jerseyians are at the mercy of road and weather conditions; one bad snowfall and your car can go spinning into a snow bank as you’re driving along the slippery roadways. Vulnerable to the elements, Newark drivers are at a higher risk of being involved in a roadside accident or getting their buried cars bulldozed by snowplow men.

5.) Baton Rouge, Louisiana
The average auto insurance premium rate for Baton Rouge comes to a total of $3,364 annually. While it certainly beats Detroit’s nearly $11,000 rate, it’s still expensive for motorists between 15-24, young people who are still in high school or fresh out of college earning minimum wage. Like some of the cities above, Baton Rouge is cursed with abysmal road conditions and traffic congestion. The average Baton Rouge homeowner made $52,091 in 2014, according to the Department of Numbers with unemployment growing at six percent. With Louisiana’s student loan debt averaging $22,789, students aren’t readily able to pay these insurance prices.

Work It!
Fortunately, there are a number of ways to get a discount on your student auto insurance. Being a good student, keeping a clean driving record, servicing your vehicle regularly and maintaining residency in the state where you attend school will all help your cause. Also, insurance providers work to help you, so ask about discounts. Chances are they’ll deliver.