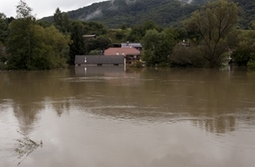 Homes, no matter where they are located, must take a beating from Mother Nature on a regular basis. For some locations, these meteorological outbursts can be much more violent and unpredictable than in other places, and due to the onslaught of natural disasters, these regions are considered high-risk for insurance purposes.

The Insurance Information Institute reported on a January 2015 study by the National Association of Insurance Commissioners that concluded homeowners insurance premiums, on average, rose 5.7 percent in 2012. While this is less than the 7.2 percent uptick in 2011, it's still an increase, and nobody likes paying more money each year. While rates rose on average, some states saw more of a rise than others, with a $1,546 difference between the highest and lowest prices. By wisely choosing where to purchase a house, homeowners can drastically alter their insurance rates.

States with the highest and lowest rates
Florida led the rest of the states with a $2,084 homeowners insurance premium, followed by Louisiana, Texas, Oklahoma and Mississippi. It's no coincidence that most of these states are located on the Gulf of Mexico, with Florida uniquely sandwiched between that and the Atlantic Ocean. This makes all of these locations prime targets for tropical storms and hurricanes. Meanwhile, Oklahoma sits squarely in Tornado Alley and takes a pounding from the amount of twisters that touch down there each year.

On the other end of the spectrum, Idaho had the lowest rates at a $538 per year, with Oregon, Utah, Wisconsin, Nevada and Washington rounding out the states with the cheapest premiums. Once again, geography plays a considerable role in these prices. As Insurance Journal reports, it's no coincidence that some of these states, have some of the lowest National Hazard Risk Scores in the country. With a smaller chance of being struck by a national disasters, this lowers the risk potentials.

"Having such low scores is why their insurance rates are also lower," said Loretta Worters, vice president of the Insurance Information Institute, according to Investopedia.com. "These states have a low risk in terms of hazardous natural events."