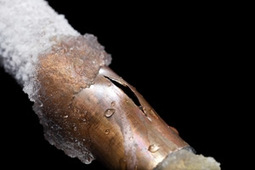 The weather is turning cold and winter is descending on much of the U.S. Along with the anticipation of snow, hot chocolate and holiday shopping comes the worry of high heating bills and frozen pipes.

The problems and expenses frozen pipes create are a nightmare for homeowners. According to State Farm, a one-eighth inch crack in one pipe can cause 250 gallons of water to flood a home each day. This not only leads to a time-consuming and expensive clean-up process, but can cause structural damage to a home and result in mold.

There are three main reasons for pipes freezing in winter: The temperature outside drops quickly, the home's thermostat is set too low and the pipes aren't properly insulated.

Luckily, proper preparation can mitigate these factors and reduce the risk of this ordeal coming true.

Prepare pipes during fall
Before temperatures drop, homeowners should insulate pipes and drain those they won't need. Many pipes in crawl spaces, attics and basements are left uncovered, which makes them more likely to freeze. Homeowners should have the pipes insulated with heat tape or thermostatically controlled heat cables that have been approved for the purpose of warming pipes, State Farm recommended.

Homeowners can help keep cold temperatures at bay by sealing the areas around pipes, electrical and vents connected to the outside of the home. These spaces leak hot air from the home, which will reduce the efficiency of the heating system and make the pipes colder than they need to be.

Additionally, all outdoor faucets should be drained and shut off for the winter.

This is also a good time for homeowners to contact their home insurance agent to clarify whether their policy covers damage caused by burst pipes.

Monitor pipes during winter Even with proper planning, homeowners have to take the right steps during the winter to prevent frozen pipes. The thermostat in the house should never be set lower than 55 degrees Fahrenheit. Also, it only takes a little bit of water running through pipes to stop them from freezing so make sure to turn your taps on a few minutes each day in faucets you don't normally use. If it becomes particularly cold outside, it may be a good idea to open cabinet doors to help heat pipes behind the fixtures and leave faucets dripping during the night.

What to do if pipes freeze In some areas of the U.S., temperatures can drop so far that no matter what homeowners do, there's a risk of pipes freezing. Pipes can freeze once it gets down to 20 degrees Fahrenheit outside, Weather.com reported, which is a common temperature in some parts.

If pipes are frozen - meaning no water comes out when turned on - homeowners should immediately call a plumber. Sometimes frozen pipes can be warmed with a hairdryer, and if homeowners want to try this, they should start using the hair dryer as close to the faucet as possible. Additionally, an open flame should never be used to heat pipes.

If a pipe has cracked and the home is flooding, homeowners should turn off the main shutoff valve to the house.