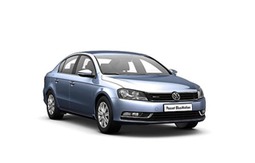 A family sedan with European flair, the Volkswagen Passat recently had a makeover and is now manufactured in Tennessee with an American model exclusively for the U.S. drivers. As a diesel engine vehicle, the Passat has an efficient fuel economy rating and has quickly become one of the more popular cars on the road.

When it comes to insuring this foreign bad-boy, considerations for safety ratings, damage susceptibility, likelihood of theft and cost of replacing parts need to be measured.

The Volkswagen Passat was a top safety pick by the Insurance Institute for Highway Safety in 2013. With several safety features including side airbags, anti-lock brakes and electronic stability control, the 2013 Passat received good ratings in four out the five categories of safety tests. In order to be a top safety pick, a vehicle must receive at least four good ratings and an acceptable in the fifth category.

With a brain of its own, the Volkswagen Passat is equipped with an Intelligent Crash Response that will automatically cut off the fuel supply, unlock doors and flash hazard lights in the event of a crash.

Related to safety ratings, the Passat's high scores have made it a strong car that holds up well in a crash. Insurance costs relate directly to how much damage is likely to occur in an accident. According to the National Highway Traffic Safety Administration, the Volkswagen Passat scored a 101 on its damage susceptibility index. The 2013 average for vehicles in its class was 103, making the Passat a better pick for damage resistance compared to similar sedans.

Unfortunately for those who like flashy things, cars that are more likely to be broken into have a higher cost of insurance. However, the Volkswagen Passat is a midsize family sedan that is moderately priced - not exactly a Beamer or Benz. While still stylish, the Passat's focus is utility and comfort, making it less likely to be stolen, vandalized or broken into. Out of the top ten most popular stolen vehicles, Volkswagen didn't make the short list in 2012.