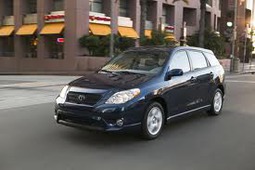 The Matrix is a somewhat recent addition to the Toyota family. Like many of its sister cars, the Matrix is a hit with drivers, ranking as the 6th best-selling car in 2013 at the time this article was written.

How does it fare from an insurance perspective? Our insurance experts at CoverHound have taken a closer look.

Insurers determine the insurance cost of a given vehicle based on the following four categories: safety ratings, theft rates, replacement costs, and overall damage susceptibility.

The Matrix is basically a Corolla with the added pizazz of all-wheel drive, which is a definite plus in the eyes of insurers. As one of the rare vehicles in its class with AWD, the Matrix also consistently scores at or above average in crash tests by the IIHS and NHTSA.

As an import, costs can be a little bit higher for the Matrix compared to its domestic counterparts. However, given the volume of Matrix’s on the roads, parts are plentiful which drive down costs..

Insurers rely heavily on government data, via the NHTSA, reporting on relative insurance costs of vehicles involved in a collision. The Matrix has a loss payment index of 104, slightly higher than average (100), and a good amount higher than the average for other hatchbacks/station wagons (94). Overall, shouldn’t be much of a red flag for insurers evaluating damage susceptibility.

We’ve looked at countrywide average on what it costs to insure the Toyota Matrix for our customers on CoverHound: