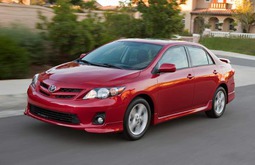 The 2013 Toyota Corolla sits at number 6 on USA Today’s Best-selling Cars of 2013 list. The Corolla has always been known for its safety and security provisions. This sedan has excellent safety features and crash test ratings, along with an excellently low sticker price.

The Corolla has always found a place in the hearts of customers through its comfortable style, safe ride, and low sticker price. The newest model doesn’t veer much. It stays true to those three main selling points but also adds a snazzy new grill to try to make it more stylish. Though some reviewers suggest that this new feature doesn’t do the trick, the fact that it’s a great car can’t be escaped.

But how much does the Toyota Corolla cost to insure?

The traditional metrics -- cost of replacing parts, damage susceptibility, safety ratings and theft levels -- are all fractions of a vehicle’s final insurance rate. But first, we’d like to show you a new metric that shows sheds lights on insurance rates in a different way.

The newest edition to the CoverHound features list is our Insurance Over Sticker rate. We take the average cost of insuring a vehicle, in this case the Corolla -- and divide it by its sticker price. The data comes directly from our own insurance platform.

The Toyota Corolla has an Insurance Over Sticker rate of 13.8%, higher than the average for all vehicles, which is 9.6%.

The MSRP for the Toyota Corolla is $14,952, while the average insurance cost per year for this vehicle is $2,063.38. The insurance cost divided by the sticker price gives us a rate of 13.8%.

So why is the Toyota Corolla so expensive to insure, relative to its sticker price, which is on the low side? This is where the traditional metrics come into play.

The Corolla scores fairly well when it comes to safety. It received top scores from the Insurance Institute for Highway Safety, resulting in another year atop the list of Top Safety Picks for 2013. Top-selling cars like the Toyota Corolla are usually simple to find parts for, so the cost of replacing are almost always a fair price.

Unfortunately there has been multiple reported issue with the front inner fender liner in models from 2009-2012. Let’s hope that Toyota fixed this small problem in the 2013 edition. This particular defect may be a contributing factor to the high insurance cost.

Theft ranking is most likely the other main contributor to this high cost. The number of cars that are stolen each year, and the subsequent claims for them, are what matters most to carriers. The Corolla is a popular car. It has ranked on Forbes’ list, America’s Most Stolen Vehicles, since 2008. This does not sit well with insurers.

So while the Corolla gets great gas mileage, safety ratings and has a low sticker price, the cost to insure it is higher than for most other cars on the road.