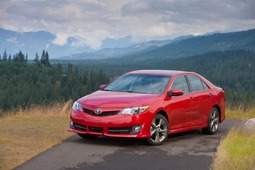 The Toyota Camry is the best-selling car in America, and it’s not even close. More than 400,000 new Camrys were moved in 2012, 70,000 more than the second-place place vehicle, the ever-popular Honda Accord.

The merits of driving the Camry are numerous and well-known, and it’s not our place to list them here. What CoverHound can add, though, is whether each vehicle is, on average, expensive to insure.

In the past, we have focused on the four major metrics that car insurers look at when quoting a car’s rate. We’ll get to those below, but now we’re excited to unveil a new, proprietary metric that really looks under the hood of insurance rates.

We’re calling it “Insurance Over Sticker” and the number represents the average cost of insuring, in this case, the Camry -- divided by its sticker price. The data comes directly from our platform.

The Camry has an Insurance Over Sticker score of 10.8%, which is slightly above the average percentage of all vehicles, which currently sits at 9.6%.

The MSRP for a Toyota Camry is $20,503, while the average insurance cost per year for the vehicle totals $2,216. The insurance cost divided by the sticker price is 10.8%.

Why is this the case? This is where the “traditional” metrics come in -- and those are cost of replacing parts, damage susceptibility, theft rates and safety ratings.

The Camry does well when it comes to replacement parts, simply because the car and its parts are so ubiquitous. In short, if your Camry needs work, chances are that the repairs will be quick and inexpensive -- which of course is just what carriers want to hear.

On the damage susceptibility front, the Camry is right around the mean. There are some questions about the durability of the exterior, which tends to dent more easily than both insurers and drivers would like.

It’s in the theft department that the Camry runs into trouble, quite literally. The fact that there are so many Camrys out there actually works against it here. Police reports and carrier data is much less concerned with the percentage of cars stolen, than they are with the raw numbers. So while Porsche 911 might be stolen at a much greater rate, since there are so many more Camrys on the road to begin the raw numbers of Camrys stolen will be the highest.

The safety ratings from both the IIHS and NHTSA are both quite good, with the Camry earning above-average or perfect marks on every single test.

So in the end, the Camry is an excellent, popular car that is slightly costly to insure relative to its sticker price. The reasons for this include the amount of time it gets stolen each year, and also because it’s not exactly a family car, which tend to have room for kids, and therefore need to be driven with an extra ounce of precaution.