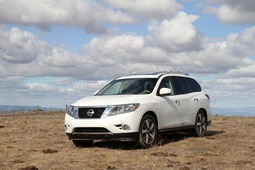 The Nissan Pathfinder has revamped itself for 2013. It’s even changed from an SUV to a Crossover. Though some may not like that the Pathfinder has given up some of it’s off-road handling for a more comfortable on-road ride, no one can argue that it’s new fuel economy and sticker price make it almost a steal.

There are four major metrics that car insurance carriers look at when quoting a car’s rate. But first, we’d like to show you one of our newest features, which we first introduced in an article about Insuring Your Camry.

This new feature, that we like to call “Insurance Over Sticker," will give a number based on the average cost of insuring, in this case, the Pathfinder -- divided by its sticker price. The data that we have gathered comes right from our own insurance platform.

The Pathfinder has an Insurance Over Sticker rate of 6.0%! This is well below the average, which is 9.6%.

The MSRP for the Nissan Pathfinder is $29,101. The average insurance cost, per year, is $1,726. So according to our calculations, its Insurance Over Sticker rate comes in right around 6%.

This rate is well below the average, by about 3.5%. Why is this? This is where the traditional metrics come in. Insurance cost is based upon four main metrics --cost of replacing parts, damage susceptibility, theft rating and safety ratings.

Unfortunately, in 2010 it ranked number 7 in Most Commonly Stolen Vehicles by MainStreet. The more that are bought are usually the most common for insurance claims. This is not something insurance carriers like to hear.

However, the Pathfinder has great safety ratings. It received either average or higher than average ratings in almost every test.

The replacement parts for the Pathfinder are neither expensive nor hard to find. Since this vehicle is rising in the ranks of popularity, getting something fixed is fairly simple. The Pathfinder received a good score for the exterior rating, and no recalls have been reported yet. Damage susceptibility seems low.

Overall, the Nissan Pathfinder has a great new look for 2013. This redesign comes with a better fuel economy, which is 20/26 mpg. MSRP isn’t exactly breaking the bank, especially in the crossover class. And of course, insuring this new crossover is actually cheaper than most other vehicles, relative to its sticker price.