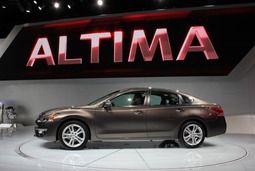 The Nissan Altima was the 4th-best-selling car in America in 2012. This makes sense: the Altima is a fine, mid-sized car with a smart look. Accordingly, more than 258,000 Altimas were sold on American soil in 2012.

The biggest factor attracting folks to the Altima are its base price ($20,252), its design and its interior. In short, people get a good-looking, good-performing vehicle at the right price when they sign up for the Nissan Altima.

But how much does it cost to insure?

In the past, we relied on four major metrics when discussing how a carrier arrives at a rate for a certain vehicle. But now we’re able to use our new “Insurance Over Sticker” metric that really pulls the curtain back from in front of insurance rates.

The data point represents the average cost of insuring a vehicle, in this case, the Altima -- divided by its sticker price. The data comes right from the CoverHound platform.

The Altima has an Insurance Over Sticker score of 10.6%, which is slightly above the average percentage of all vehicles, which currently sits at 9.6%.

The MSRP for the Nissan Altima is $20,252, while the average insurance cost per year for the vehicle totals $2,336. The insurance cost divided by the sticker price is 10.6%.

So why is the Altima more expensive than the average car to insure? This is where the “traditional” car insurance metrics come in -- and those are safety ratings, cost of replacing parts, damage susceptibility and thefts

The Altima scores just fairly on in safety ratings from both the Insurance Institute for Highway Safety (IIHS) and from the National Highway Traffic Safety Administration (NHTSA). The IIHS gave the Altima only “Acceptable” rating for rear crash and roof strength tests.

The top-selling cars like Altima will usually find a surfeit of parts (and parts dealers) ready to service their vehicles. In other words, when it comes to the cost of replacement parts for the Altima, prices will remain low based on the high levels of supply.

Not unlike it’s safety ratings, the Altima’s damage susceptibility is only average. While it does boast of a comfortable ride, concerns remain about the durability of both the truck and the roof in an accident. Carriers are understandably weary of large claims coming from damages to such vital parts of the vehicle.

In terms of getting stolen, the Altima doesn’t get purloined at a high rate per capita, but that is not the point. What is important is the raw number of Altimas stolen every year, which remains quite high.

So the Altima is indeed a solid, popular car at the right price for many American drivers. It is, however, slightly more expensive than the average new vehicle to insure relative to it sticker price. This fact should be just another factor that goes through your mind when deciding whether to buy one.