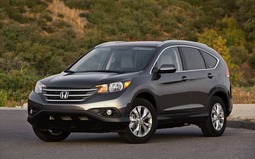 The 2013 Honda CR-V is Honda’s best crossover vehicle. The newer model should be a nice step up from last year's. However, some reviewers have mentioned that the "new" comfortable ride and quiet cabin were, in fact, nothing new. There have also been some complaints with the steering wheel. Some thought it felt “unsettled."

So what’s the insurance cost for the new CR-V? There are four main metrics that car insurance carriers look at when quoting a car’s rate. Before we get into those though we’ll show you our newest feature, the Insurance Over Sticker rate. This rate takes the average cost to insure the vehicle -- the Honda CR-V in this case -- divided by the sticker price. The data we gathered comes directly from our insurance platform.

The Honda CR-V has an Insurance Over Sticker rate of 7.0%. That is well below the average, which is 9.6%.

Why is the Honda CR-V so inexpensive to insure? This is were those traditional metrics -- cost of replacing parts, damage susceptibility, theft ranking and safety ratings -- tell the story behind the headline.

The CR-V has some of the best safety ratings on the road. The National Highway Traffic Safety Administration gives it 5-star overall ranking. It’s also earned the top “good” score from the Insurance Institute for Highway Safety and is a Top Safety Pick.

Hondas are also very popular, and have been for a long time. It’s safe to say that obtaining parts for this car is fairly easy and inexpensive. The damage susceptibility is also low. Again, the most common complaints centered on steering. Crash-test ratings were good as well and this is something the insurance companies love to hear. It means fewer claims will be made.

Theft ranking for the CR-V is also low, which is surprising since it’s such a popular vehicle. Usually the vehicles that are the most popular, and the most common in a given neighborhood are the ones that are stolen on a more regular basis. But apparently this is not the case for the CR-V and carriers love that.