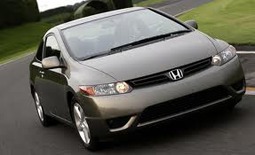 The Civic is one of the most popular vehicles in the United States for a variety of reasons. Not only is it affordable, but the value is tremendous given its strong combination of good safety ratings, fuel efficiency, and reliability. On top of that, its generally good looking and consistently well manufactured year in and year out.

Whether you are an existing owner or a prospective buyer, you may be curious as to the relative insurance car insurance cost of the Civic. We’ll match up the Civic’s characteristics against the four components of a vehicle’s insurance cost as well as provide a relative estimate of what it might cost to insure the Civic.

Insurers determine the insurance cost of a given vehicle based on the following four categories: safety ratings, theft rates, replacement costs, and overall damage susceptibility.

The Civic has consistently scored well on safety ratings amongst its category. The 2013 model was rated as the overall safest vehicle period, by both the National Highway Traffic Safety Administration (NHTSA) as well as the Insurance Institute for Highway Safety (IIHS).

The Civic and its big sister, the Honda Accord, have consistently been atop the theft lists, year to year. There are a few reasons for this:

While the Civic gets some bad marks in the eyes of insurers for this reason, the impact is probably lower than you may expect. Recent models have fared well in terms of theft rates due to newer safeguards to protect against theft.

Like other imports, the Civic has a higher cost to replace parts relative to the domestic peers in its category. With that said, the ubiquity of the vehicle, along with its in general affordability, make it overall a cheap car to repair for insurers.

Insurers rely heavily on government data, via the NHTSA, reporting on relative insurance costs of vehicles involved in a collision. The Civic’s index of 109, while slightly above the overall average (100), is actually below the average of other vehicles in its category (119).

We’ve looked at countrywide average on what it costs to insure the Honda Civic for our customers on CoverHound: