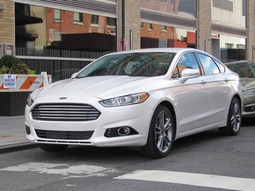 The 2013 Ford Fusion has a nice new look to it. It sports a more “corporate” appeal and flashes little bit more glam. At least that’s what Ford was going for. Unfortunately, some consumers think it just looks like a bigger Either way, there’s no denying that the Fusion is a nice-looking car. And the sticker price doesn’t look too rough either.

However, a flashy new look and a decent sticker price doesn’t always mean the best of all worlds. You also need to consider the insurance cost. So what does it take to insure the Fusion?

First, we’d like to show you a new feature of ours, Insurance Over Sticker. This rate takes the cost of insuring the vehicle--in this case the 2013 Ford Fusion--divided by its sticker price. The data we use comes directly from our own insurance platform.

The 2013 Ford Fusion’s Insurance Over Sticker rate is 10%. This is minimally higher than the average, which is 9.6%.

So what goes into deciding the insurance cost of a vehicle? As mentioned before, insurance carriers use four main metrics--the cost of replacing parts, safety ratings, theft ranking and damage susceptibility.

Although it hasn’t been tested yet by the National Highway Traffic Safety Association, this new model has already earned a Top Safety Pick award. The Insurance Institute for Highway Safety has rated almost every category “good”, the highest rating from them. Insurers like to hear this about vehicles.

The Ford Fusion has been a top seller for Ford in the past few years. It’s not a leap to believe that the cost of replacing the Fusion’s parts is not difficult or inexpensive. Also, according to the Examinor, the 2013 model is 13% cheaper to fix when it comes to body damages.

Unfortunately this car takes a big hit due to an early recall. Ford recalled the 2013 Ford Fusion 1.6-liter engines to correct a potential engine overheating problem. They updated the cooling system to better handle the engine temperatures. Though they caught this early on, it’s definitely something insurance carriers like to stay away from.

Thankfully though, the Ford Fusion did not show up on the 2012 list of most frequently stolen cars. However, it did show up on the 2010 list. That being said, Ford models showed up plenty of times on the list and that doesn’t bode well with the powers at be.

Though the cost of insurance is neither inexpensive or overly expensive, the sticker price of the 2013 Fusion really helps give this vehicle a just above average Insurance Over Sticker rate. You could definitely do worse than this car. All things considered, if you’re in the market for a new car that’s inexpensive to buy and insure, this is the one for you.