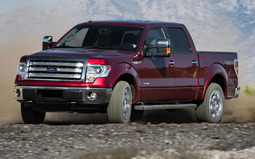 The new 2013 Ford F-150 has been making a splash in the news recently. Not only has it been ranked first out 10 Full-Size Pickup Trucks by U.S. News -- it has also been ranked number 2 in USA Today’s Best-selling Cars Forecast for 2013.

Though it costs a little bit more than the previous year’s model, it gets the best gas mileage out of the entire Ford line of pickups. So it’s a trade-off, money-wise. Insurance carriers look at four main metrics when determining a rate. We’ll look at those momentarily, but first we’ll show you the Insurance Over Sticker rate.

The newest CoverHound feature, Insurance Over Sticker, gives a number based on the average cost of insuring the vehicle, in this case the F-150 -- divided by its sticker price. The data comes directly from our own insurance platform.

This rate is just above the average Insurance Over Sticker rate. Why is that? This is where the traditional metrics come into play. Insurance cost is based on the four main metrics that insurance carriers deem most important-- cost of replacing parts, safety ratings, theft rating and damage susceptibility.

Another thing insurers like to hear is that the cost of replacing parts is neither expensive nor are they hard to find. Since this vehicle is relatively popular, and seeing as Ford has been around since the beginning of time -- for cars that is -- and the fact that it seems to be a contender for most popular vehicle this year, finding the parts shan’t be hard.

There haven’t been any reported recalls so far. Unfortunately for Ford though, the F 150 has been recalled numerous times in the past few years. Hopefully this year’s version will have a different future, but it looks like insurance carriers don’t want to take too much of a chance on it. Same goes with theft. Though it didn’t rank any list for commonly stolen, it goes with all popular cars since they’re more likely to be around.