How Does Car Insurance Compare From State To State? 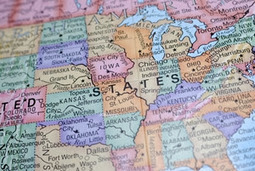 Ever wondered why your car insurance premium in Washington, D.C. differs from your in-law’s premium in Ohio? A study compiled in January 2015 by Quadrant Information Services calculated how the premiums of car insurance compare from state to state. The study analyzed rates from six large carriers (Allstate, Farmers, GEICO, Nationwide, Progressive and State Farm) in 10 ZIP codes per state, and found that the national average rate is $1,311 per year to insure one vehicle for a 40-year-old male driver with good credit and a clean driving record.

Regional factors certainly affect how rates of car insurance compare. The factors include: population, climate, the rate of competition among insurers, as well as the percentage of insured drivers in the area. Insurance carriers also pay close attention to legal factors such as state laws and local court systems, with socioeconomic factors such as traffic and crime also playing a part.

A Tale of Two States

While the two states share some of the same characteristics – rural land and a sparse population – Idaho has a high percentage of insured drivers, while Montana is home to many uninsured drivers. Another reason why Montana’s rates are much higher is due to what insurance carriers view as a more lenient court system, and a state legislature that has been slow to implement safety laws, such as prohibiting texts while driving and lax seat belts laws.

Washington D.C., though not a state, joins Montana on the high premium list, but for different reasons. D.C. has the unique problem of being one large, dense city with notorious congestion and traffic issues. Unlike an actual state, which usually holds cities and smaller towns to even out the population, the District of Columbia consists of one large city in and of itself, with a court system believed by providers to favor plaintiffs over insurance carriers, driving premium costs up further.

On the flipside, Ohio drivers benefit from provider competition, with the second highest number of carriers in the country behind Illinois. Maine benefits similar to Idaho with a sparse population and less of a likelihood for violent weather such as tornadoes, earthquakes or hurricanes. When disaster-type weather isn’t prevalent, the chances of mass claims go down significantly, and thus, so do the average premium rates. Rural states have less populated urban areas and considerably fewer drivers on the road. If most of the drivers are insured, insurance providers will typically look at that state or specific ZIP code region as an overall good risk.

When an out-of-state move is on your horizon, take into consideration some of the variables that can lead to significant changes in how the rates of car insurance compare from state to state.

And don’t forget to check out CoverHound’s insurance portal today to shop insurance quotes from several top providers in minutes!