Highlights From The 2015 Chicago Auto Show 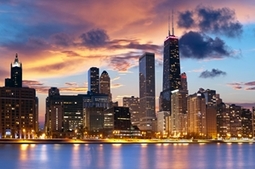 The Chicago Auto Show recently came to a close, but just because it's over, it doesn't mean you can't still revel in the highlights. Hailed as one of the best car shows in the country, every major automaker hauled their wares to the wintry Chicago tundra to display new models and concept designs.

Among the numerous luminaries that stood out at this year's unveiling of tomorrow's vehicles, technology, power and concepts took center stage.

More technology
Cars are coming with so many technological gadgets and gizmos attached to them, that they're essentially computers with wheels at this point. Nowhere is this trend more prevalent than the convention center's showroom.

ABC affiliate WLS​ in Chicago reported Ford showcased their new, Batmobile-like 2016 Police Interceptor. Touting a "surveillance mode" that will detect someone approaching the vehicle, the Interceptor will close all windows and lock the doors to protect any officers and create a buffer for a reaction time. Meanwhile, the new GT350R Mustang includes Synch3, giving drivers the ability to sync their smartphone with the car's dash screen.

Hyundai had their hydrogen-powered Tuscon fuel cell on display, which will provide a longer range than an electric battery but it will require significantly less charging time.

More power
Despite many consumers clamoring for greater fuel efficiency, there is still a notable portion of drivers that want bigger and stronger vehicles. For those who crave more horse power and bigger engines, the Chicago Auto Show did not disappoint.

Dodge upped the high performance ante with their Charger and Challenger Hellcat as well as the SRT Viper.

More concepts
Perhaps the portion of an auto show that boasts the most innovative new designs, concept cars create an aura of futuristic wonder for auto lovers to marvel at, even if the majority of these cars will never find their way to the street.

According to the Indianapolis Star, Chevrolet will begin production on a new electric car, the Bolt, which they claim will have a range of 200 miles, almost double the average range for electric cars not named Tesla.

Cars.com reported about the Toyota FT-1 concept car, a sleek sports car which the company modeled after the "Gran Turismo" video game.

It doesn't matter whether someone is driving next year's newest model fresh off the assembly line or a 10-year old minivan with a multiple repairs, consumers still want the best possible coverage possible.