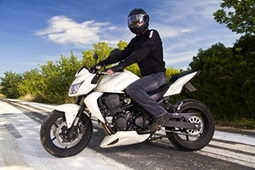 Motorcyclists have long fought their state officials to make it optional to ride a motorcycle without a helmet, but more states continue to enforce mandatory helmet laws for riders.

However, when states implement helmet laws, the majority of riders obey the law and option for a helmet, but in states that do not require a helmet, most riders go without the protection, Nerd Wallet reported.

In 2013, the Highway Loss Data Institute (HLDI), a part of the Insurance Institute for Highway Safety, discovered that when helmet laws are relaxed in a state, deaths and injuries from motorcycle crashes increase.

Insurance rates rising in non-helmet required states
For example, in Michigan, drivers were forced to wear motorcycle helmets for more than four decades, but when the state eased up on the helmet laws and made it only mandatory for riders 21 and under - insurance rates went up significantly. The state actually made it a requirement to have at least $200,000 in medical coverage on their motorcycle insurance if they plan to ride without a helmet. For most riders, that amount of coverage would likely raise their insurance rate.

Additionally, the agency discovered that Michigan motorcycle insurers' losses were 51 percent more when the helmet law changed in 2012. In 2010, the U.S. Centers for Disease Control found that when riders use motorcycle helmets, motorcycle insurance companies saved more than $3 billion.

Correlation with uninsured riders
The National Highway Traffic Safety Administration (NHTSA) said that one of the biggest problems with helmetless motorcyclists is that they are often uninsured as well. This makes insurance premiums higher for those who even wear helmets in states that do not require the protection.

NHTSA report said a report in Illinois found that hospitalization costs for riders who were wearing a helmet were one-third lower than those who were hospitalized without wearing a helmet. Tim Hoyt, vice president of safety at Nationwide Insurance Enterprises, explained that when riders don't wear a helmet, it affects others as well.

"We may not be able to eliminate all the risk from motorcycling, but helmet laws greatly reduce the most expensive head injuries," said Hoyt, according to the report. "Reducing these costs is good for the consumer and it is good for business, too."

Helmetless supporters argue equipment increases crashes
Those who strongly support helmetless laws have often claimed that helmets can increase fatigue, reduce hearing while on the road and impair visibility, the HLDI report stated. However, the agency discovered that damages to motorcycle riders in crashes who lived in states with changed helmets laws saw no increase or decrease in the amount of wrecks involving motorcyclists.

"Weakening the helmet law seems to have made it somewhat more likely that riders will sustain injuries, but the big impact has been on the seriousness of the injuries," David Zuby, chief research officer for HLDI said, according to the report. "Helmets can't protect against all injuries, but they do help prevent debilitating and often fatal head trauma."

Current helmet laws
As of now, there are only 19 states that require motorcycle riders to wear a helmet while on the road, the HLDI report stated. Also, there are 28 states that have helmet laws only for certain riders, but this could continue to change.

Motorcyclists who are riskier to insurance companies will often have to pay more on their premiums, and riding without a helmet puts riders in that exact dilemma.

To find the most affordable motorcycle insurance coverage on the Web, use CoverHound to save time and money with your search.