Get Better Gas Mileage In The Winter 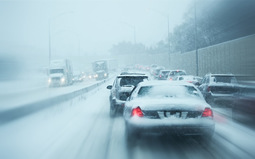 In many parts of the country, the winter months bring a whole new set of things to look out for. As soon as it starts to cool off, people begin to weatherproof their homes, put away their summer clothes and bring out their jackets and scarves. Beach and pool toys are stored away and sleds, mittens and shovels make their appearance.

Winter brings about many changes in the way people do everyday chores and tasks. The way we drive and take care of our car is no different. Slippery roads and icy windshields create problems drivers don't have to deal with in the summer. One of the most overlooked issues facing winter drivers is lowered gas mileage.

Colder weather, lower fuel efficiency
According to FuelEconomy.gov, at 20 degrees, a conventional car will be about 12 percent less efficient than at 77 degrees. Hybrid car owners have it even worse: the fuel efficiency drops between 31 and 34 percent at such lowered temperatures.

There are many reasons for this change and a lot of them are inevitable. For instance, engine oil and other fluids become thicker when they are cold, creating more friction inside the car's engine and causing the car to use more energy.

Autoblog said another major reason is the change in gasoline available in the winter as compared to the summer. In the summer, the gasoline is made using heavier components so it doesn't evaporate as readily. However, the freezing point is too high to use during the winter. During the colder months, gasoline typically uses heavier components to lower the freezing point. The altered solution means more additives in the gas, resulting in fewer miles per gallon.

Keep your car warm
However, many of the causes of lower mileage can be addressed to get the most from your gallon of gas. These techniques won't reverse the effect of winter itself - your car will still perform better in the summer - but they can help save fuel and money in the long run.

"Cold batteries are much less efficient than warm ones."

Cold batteries are much less efficient than warm ones, according to CNBC. If drivers have access to a garage, this can help because it will take less time for the engine to warm up to the temperature at which the car runs most efficiently. Drivers should also try to spend as little time warming up their car before leaving as possible. Idling wastes gas; plus the car will warm up faster when in motion. Most car manufacturers suggest a warm-up time of about 30 seconds, but car owners should check their manual to see how much time will be most beneficial for their car.

Better driving habits
Practicing good driving habits can achieve better mileage. For instance, driving at a constant speed, rather than speeding up and braking when needed, is easier on your car's fuel economy, according to Cleveland.com. In the winter, doing your best to stay at a steady speed is especially beneficial because it is a safer way to drive in icy conditions.

To help reduce the number of times you slow down and speed up, put more distance between your car and the next. This will mean that if the car slows down, you can try to coast to a lower speed rather than braking. This is also a safe driving practice. The more space between you and the next car, the less likely it is that icy roads will cause an accident.

When choosing the speed you want to drive at, it's best to choose a lower speed. Beyond 55 miles per hour, a car's fuel performance begins to drop. Staying at a constant 55 to 60 miles per hour will help to save fuel in the long run.

Cars run better when they are in use for a longer period of time, according to FuelEconomy.gov. When they're used to run a quick errand, cars are likely performing at their worst for the entire trip. Combining errands will mean the car will operate more efficiently throughout more of the ride.

Small changes
Altering your parking location and driving habits are sure to help, but when trying to achieve the best fuel economy possible, every little bit matters.

For instance, part of the reason cars don't get the best mileage during the winter is because they aren't as aerodynamic in cold air, FuelEconomy.com explained. The air is actually denser during the winter months, which means it takes cars more effort to drive through it. Making your car as aerodynamic as possible will help. Take the bike rack down from the roof of the car, and remove any other unnecessary feature. Making sure to brush off all the snow from the car's roof will also help with this.

Tires don't hold air as well during colder months. Flatter tires create more resistance on the road. Begin checking them more frequently to ensure they have the suggested amount of air for the best performance.

Winter months often mean drivers will spend more money on gas than in the summer. However, with these tips, your car's fuel economy doesn't have to be so bad. Make sure your car is protected this winter by getting the best car insurance for it. Compare rates today on CoverHound's website.