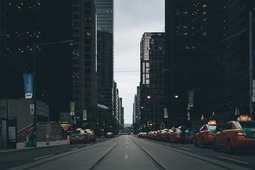 Those who have seen the future insist cars and trucks capable of driving themselves without human intervention will come to dominate personal transportation. It’s a worthy goal, both in terms of reducing traffic fatalities and reducing congestion on our highways. It remains to be seen how this will affect the type of auto insurance we’ll need when the cars do the thinking, or how owners will compare car insurance rates. But one thing is certain. While autonomous vehicles are in our future, defensive driving and auto insurance are still required now.

Traffic Fatalities Expected to be Eliminated
The most compelling argument for autonomous vehicles is the anticipated drop in traffic fatalities. Proponents of self-driving cars say when they have completely replaced human operators, traffic signals and stop signs will be a thing of the past. Cars will communicate with one another and manage themselves at intersections accordingly. Tesla Motors has already demonstrated the veracity of this to a degree with its “Auto Pilot” feature earning credit for a 40 percent decrease in crash rates in Tesla cars since the technology was made available in 2015.

Will Car Owners Need Insurance?
Perhaps pointing the way to the future model of car insurance, Tesla offers insurance with the car to buyers in China. Ultimately, the company plans to make this part of its business model all over the world. This has prompted many to speculate autonomous cars could well be the end of auto insurance as we currently know it. After all, the argument goes, if cars are being driven by algorithms developed by their manufacturers and owners do not have the ability to control the car at all, the manufacturer should be responsible for the way the car operates—not the owner. Therefore, the manufacturer should be responsible for insuring the vehicle rather than the owner.

What About the Transition Period?
According to accident statistics released by the national Highway Traffic Safety Administration (NHTSA), 94 percent of crashes can be traced to human error. Human beings currently drive the vast majority of the cars on the road, so this stands to reason. With that said, we’re going to see a transitory period during which the roads will be shared by autonomous vehicles and cars with human drivers. To date, Google’s driverless car fleet has logged over a million miles since 2010 with but 18 accidents. All but one of those were caused by human drivers colliding with Google cars.

Defensive Driving Essential
Ultimately, the lessons we’ve learned in defensive driving courses over the years will remain valid well into the foreseeable future. Driver inattentiveness is still one of the most significant contributing factors to auto accidents. When all cars drive themselves, perhaps their builders will insure them too. Until then, we still need to pay attention to the road and continue to compare car insurance rates to find the best deals.