First Self-driving Truck Gets A License 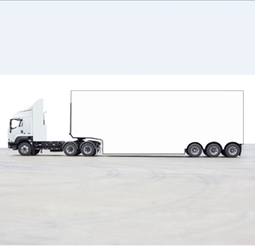 The truck employs a system called Highway Pilot that utilizes radar and stereo camera-monitoring systems on the vehicle, according to Motor Authority. This camera-based technology reads clearly visible signs and avoids traffic obstacles such as other vehicles, partitions or pedestrians. By using this technology, it means the truck does not need any other infrastructure other than road signs and the white demarcations on the highway to properly operate.

The truck comes as the result of a collaborative vehicle system between Freightliner and Daimler Trucks North America. DTNA Senior Vice President Richard Howard extolled the vehicle's virtues at the unveiling, but made sure to reiterate that drivers still played an important role in operating the truck.

"With the Freightliner Inspiration Truck, drivers can optimize their time on the road while also handling other important logistical tasks, from scheduling to routing," Howard said, according to Insurance Journal. "The autonomous vehicle technology not only contributes to improved safety and efficiency, but allows for improved communication through connectivity and integration."

Impact on insurance
Even though Nevada now allows a commercially-viable driverless truck to operate on the open roads, the truck is still not for sale. However, this marks another clear step on the road toward more autonomous vehicles on the highway. The companies manufacturing these vehicles maintain they will increase safety by reducing collisions due to driver error or fatigue. While there is still some time before whole fleets of self-driving cars clutter the roads, the Freightliner Inspiration Truck demonstrates how quickly it is becoming a reality.